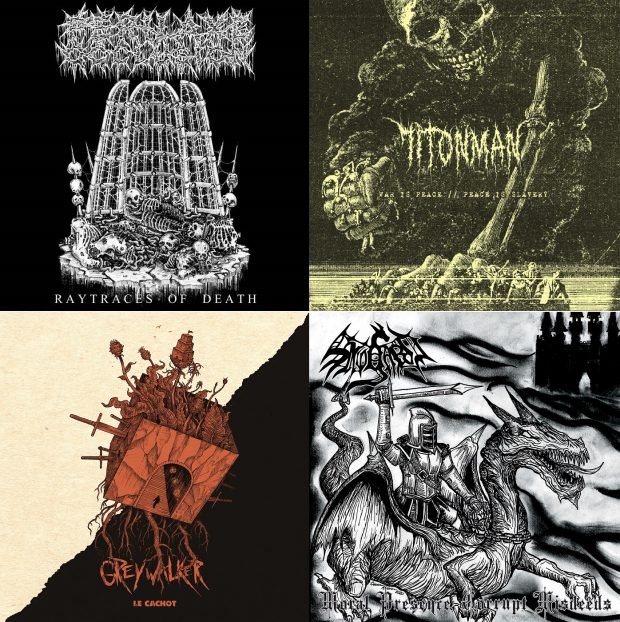 This is the first in a series of EP roundups. It may also be the only one in the series. Basically, I’ve got a bunch of short albums and EPs that deserve your time but I’ve been unable to make the time for full reviews. I think a reasonable compromise is to bundle them all together. Trust me when I say these records would not ordinarily be bedfellows…

We have some Unearth style metalcore, Polish anti-authoritarian sludge, dragon-obsessed black metal and 3D modelling themed death metal. The only thing they have in common is that they have been released recently or will be soon, and they all clock in around 30 mins or less. If even one of those descriptions piqued your interest then read on. If not… sorry you lack imagination, I guess.

I can’t for the life of me remember how I found this full record streaming on YouTube last week but I do remember that the day after, everyone else seemed to have found it too and my whole Twitter timeline was abuzz with the band’s name. This kind of hype has a pretty consistent 70/30 split in terms of whether the release is going to be of any interest to me, with the larger half on the negative side. It’s just as well I listened to the material before I saw the hype then because my curmudgeonly persona may have caused me to miss what is an absolute banger of an EP.

This is listed as a demo, but I can tell you right now this is better written and produced than tens of other death metal albums that have won that adulation of the hardcore masses in the last few years. While covering such topics as 3D modelling and rendering, computing and death, Perilaxe Occlusion play murky death metal reminiscent of early Morbid Angel or Immolation. On the final track of this 3-track demo, we even get to hear the band explore the doomier side of their tastes for a few minutes before they launch back into familiar territory with blastbeats and chunk HM-2 drenched death metal riffage. Given the expertly written death metal on display here on a demo, I can’t wait to hear a full-length,

A must-listen for anyone who owns at least one black longsleeve with an indecipherable logo on the front and down the arms.

I used to work (remotely) with a guy called Simon who moved from Scotland to America decades ago and played guitar with Screeching Weasel for a while before teaming up with Dan Vapid and the Cheats. He was telling me that he shares a rehearsal space with the heaviest band he had ever heard in person. That band is FISTER. When I heard 71TONMAN, I was immediately reminded of Simon and his (justified) FISTER fawning. Both play the same brand of sludgy doom, let melody creep in occasionally and are less hesitant to pick up the pace slightly than some contemporaries.

As with Perilaxe Occlusion, we have three longer tracks here but 71TONMAN take advantage of the EP format to try something a little different, which I appreciate. The third track is a nine-minute drone/noise piece with warped samples from what I assume is the movie version of 1984 threaded through. I would have preferred this in the middle, bookended by two thick slabs. By not doing this, the impact is somewhat lost. Nonetheless, this is a great little release to tide us between albums, with the last full release from the band being 2017’s Earthwreck. If you’ve heard this, it’s essentially more of the same, but murkier. If not, this is as good a place as any to start.

I can’t remember if it was Terrorizer or Metal Hammer, but one of those mags had Unearth’s track “A Great Dividers” on their cover cd. It was enough for me to go out and buy the album immediately. I didn’t really stay with that style of music for too long but I do always have a sweet spot for bands who have the same sort of fusion between melodic death metal and the heavier side of metalcore.

Greywalker does this. Their style is equal parts Swedish melodic death and Unearth/Darkest Hour metalcore. Le Cachot is preceded by two full-lengths from which EP doesn’t really mark a stylistic shift or experimental turn. Instead, the four songs here are the bands strongest material to date in terms of both production and songwriting. I’m not sure what goes into the decision to release an EP instead of an album when the music doesn’t differ from your other material too much – it may just be a time/pandemic thing. Regardless, this is a great entry point to the band if you’ve never heard them before.

Le Cachot is 15 minutes of melodic metalcore. As I mentioned, I never really kept up with this side of metal but I have found myself looping back and listening again when this finishes, thinking “that can’t be finished already, surely?”. That’s probably as strong a reaction as you might hope for from an EP, to be honest.

I touched on this in my The Day of the Beast review recently, but more bands should mine the horror genre for inspiration and thematic content. Outside of Lovecraft, I mean. The genre thrives on exploiting the human psychology of fear and the greatest works of horror fiction give mature, rational adults nightmares. Body gore, misogynistic fantasies, anti-religion and nihilism are far more common tropes than straight-up nightmare fuel.

While not wholly horror-themed, Raleigh, NC duo Snogard have at least made an effort to be a bit different thematically on their new EP Moral Presence, Corrupt Misdeeds. Each track covers a fantasy or mythical hero/villain pairing and it’s so dorky and nerdy that I love it. We’ve got (Simon) Belmont and Nosferatu from Dracula, Aegidius and Chrysophylax from Tolkein, Thre and Skeksis from The Dark Crystal, Odysseus and Polyphemus from Greek mythology and Thlayli and (General) Woundwort from bloody Watership Down!

There is no way a band gets away with this in any other genre than black metal. Aside from maybe power metal… Snogard takes influence from the likes of both Abigor, Immortal and Silencer which in effect means there are more trad black metal sections with term and blastbeats as well as more atmospheric synth/keyboard-led passages, of which the second track, Thra: Skeksis is a good example. There’s a reasonable chunk of dissonant weirdness to this EP too. The third track Odysseus: Polyphemus kicks off with what to my ears sounds like a lyre or maybe a traditional Japanese stringed instrument followed immediately by a passage so black that fans of Immortal will be rushing to don their bicep and forearm spikes as soon as it kicks in.

I had a lot of fun with this music, but the thematic approach made it even more fun. If you like your black metal to be trve and serious, this is not for you. If you like black metal and also think it’s fine for a band to use Watership Down and The Dark Crystal as influence and reference material then definitely check this out. Despite initially being independently released in Oct. 2020 this is being re-released through Horror Pain Gore Death Productions. An ironic label name considering how I started this. The band themselves are working on new material and released this single recently.