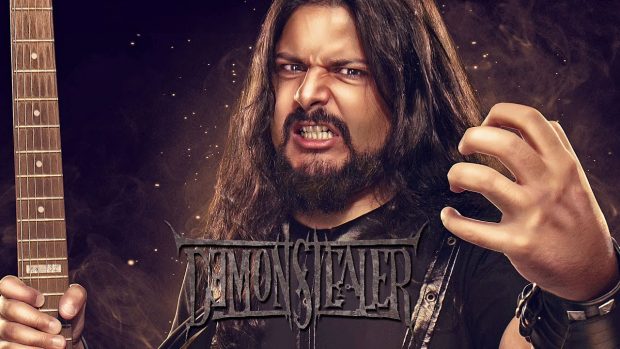 If you follow death metal in any capacity, it’s hard to miss Sahil Makhija. Also known as The Demonstealer, Sahil has been at the forefront of Indian death metal for over a decade. Not only did he co-run India’s first death metal festival, Ressurection Festival but he also runs Demonic Studios, his own label Demonic Resurrection as well as working with the band Demonic Resurrection (across five studio albums and a live album), and releasing his own solo music as Demonstealer. We had the opportunity to ask him a few questions ahead of the release of the new Demonstealer EP, The Holocene Termination (review here).

A Certain Taste: You talked a lot about being in a slump musically. This is something that happens to all creatives, but how did you get out of it?

Sahil Makhija: My slump has never been a creative block as much as it was about my frustrations with the music industry. I’ve been struggling with my band Demonic Resurrection for 2 decades and especially the last 10 years with regards to touring and being able to book shows. Despite having booked and played some of the biggest metal festivals things did not get any easier. I won’t get into details but a lot of things like this just broke me and made me want to quit and it took a while for me to find the drive and motivation to continue making music. I love the music more than anything and I’ve spent my entire life trying to get somewhere with the music. I guess it was just time that helped me get out of the funk I was in.

ACT: The new EP features a relatively large roster of guest musicians. Can you talk a little about how you managed to pull together this group?

SM: I’m just become someone who is always looking for the next awesome musician to collaborate with. So I’m in constant touch with some musicians and I hit them up well in advance for a potential future collaboration. I do however sometimes write the song and then figure out who I want playing on the track. Basically, I email the musicians and start piecing things together. Normally it’s drummers first, then bass players and then lead guitarists and for the first time on this EP, I also got Veronica from Fleshgod Apocalypse to do some guest vocals. This EP has been in the works since 2019 sometime.

ACT: As anyone who has played music with a band will know, just getting all band members to show up at the same time in the same place for writing or rehearsal sessions can sometimes be difficult. How did you manage the writing and recording experience with musicians spread across the world?

SM: It really helps that I work with extremely professional musicians who take their job seriously. It also helps that I kind of run the show and we don’t all need to be in the same place at the same time. I lay down the skeleton on the song and then send it to the musicians to work their magic. I generally get drums done first, then I record my final guitars so the riffs are then set in stone after which bass, solos and vocals are written and recorded.

ACT: I’m also keen to know how long this EP took from starting to write riffs to hearing the final master.

SM: As I mentioned earlier I started writing sometime in 2019 and started hitting up various musicians. Between getting time on everyone’s schedule and working things out it took about a year or so till I had everything in my hand. Then I had to also book time at the studio for the mix and master. I originally planned to release this in 2020 but since I couldn’t get that done I wrote my previous EP ‘And This Too Shall Pass’ and I pushed this release to 2021.

ACT: Because of the line-up choices on this record, and the fact this is a solo project, I have to assume you have no plans for Demonstealer to perform live. If not, what were your goals for Demonstealer when you started this project, and have they changed over the years? What comes next?

SM: I honestly never expected to take my solo project live when I first wrote my album ‘And Chaos Will Reign’ in 2008. It was more something I did to keep myself busy while Demonic Resurrection was taking its own sweet time to release music. In 2016 when I did my 2nd album with George Kollias on drums I did two live shows with members of Demonic Resurrection as my backing band. I think in 2018 when I did my first massive collaborative effort it became clear this would remain a studio project. My goal is just to keep releasing EPs and albums and collaborating with as many amazing musicians as I can. I would obviously love to play live but the material is extremely difficult and I would need to hire the absolute best musicians and it would cost a lot of money and given my years of experience in the industry I can safely say it’s best I give up any expectations of that. So for now I’m happy for this to be a studio project.

ACT: I noted in my review of The Holocene Termination that you had moved away slightly from the anti-religious aspects of your previous output (your recent work with Solus Ex Inferis being the most recent comparison) Can you talk a little about the lyrical inspirations behind the new EP?

SM: I think I was referring to moving away specifically from Hindu mythology which was the subject of the last DR album ‘Dashavatar’. I will forever voice my disdain for religion and that will continue in all my lyrics in some shape or form. The new EP however is more about how we, humans, are destroying the planet. It talks about our callous and reckless behaviour. Perhaps this is the inevitable fate of humanity. Even my last EP ‘And This Too Shall Pass’ was inspired by the pandemic and the absolute shitshow that ensued.

ACT: Musically, I believe this is some of the best work you have done, both in terms of technical playing and in the songwriting itself. Especially when compared to the last Demonstealer album, The Last Reptilian Warrior. What do you feel is behind this huge step up in quality?

SM: I’m glad to hear that but for me, I feel mainly the improvement is largely sonic because I think I let myself give control of the mixing/mastering process to people more qualified than myself for the job. I feel having the folks at studio Wjotek and Slawek mix the EP really took it to the next level. If any other improvements are heard I guess that’s just my natural evolution as a songwriter. I feel the more you do something the better you get.

SM: I mean it’s super super depressing and heartbreaking to see what this government has done. We thankfully have a decent state government that has done the best it could but our central government is a whole different beast. I was quite vocal against a lot of their policy and went out for protests and have spoken up a fair amount. But honestly, I’m a nobody in the grand scheme of things and I’m from a fairly privileged position that I’m not affected by a lot of things. Truth be told I’m so lucky to have not been affected much by a lot of stuff and just the fact that I can still write, record and afford to put out this music says a lot. So very grateful.

ACT: You like to keep busy with your creative endeavours, whether this is music projects or your Headbangers Kitchen YouTube channel. I am assuming your creative projects are not your full-time job, so I’m really keen to understand the secret behind finding the time for everything you do.

SM: Honestly I just dedicated my life to making music and I took jobs that didn’t pay much but allowed me the flexibility I need to pursue my creative endeavours. However in 2017 due to sheer luck and the surge in popularity of the Keto diet my Youtube channel Headbanger’s Kitchen grew massively and became my full-time job. So I’m quite grateful for that as it allows me to fund my music while working at my convenience.

ACT: Finally, are the rumours of a new Demonic Resurrection album true?

SM: I can’t say about an album but I can say there is new music coming.

Thank you so much to Sahil for chatting with us, and Matt Benton/Hold Tight for setting this up.

Demonstealer will release The Holocene Extinction on 3rd December. You can purchase the music, the tabs, and/or the full stems here.