I hate corporate talk and jargon. I’m sure you do too. But when you want to make an organisation successful it really does help to have some sort of mission statement: who you are and what you want to be.

Take Unique Leader for example. It’s not by accident that they are blowing fire up the arses of the industry’s standard purveyors of heavy music. It’s a shared vision and focus. I imagine they have a “live/love/laugh” style wall vinyl in the office that reads “go harder” because every release seems to be competing to be the heaviest thing I hear that month.

Osiah is the latest band to fight that battle with Loss, their third full-length and second with Unique Leader. The band are looking to build on the reputation they have gained among deathcore fans during tours with Cattle Decapitation and The Faceless by bringing in genre heavyweights Jason Evans (Ingested) and Ben Duerr (Shadow of Intent) for guest spots.

“Loss is Osiah’s darkest record to date, combining the monolithic misery of our debut record Terror Firma, with a more matured technicality first showcased in our sophomore; Kingdom of Lies.”

Is this true? Or is it, like corporate jargon, empty and meaningless.

From humble beginnings as a generic deathcore outfit with no real identity of their own, Osiah has put their heads down and worked hard to improve every aspect of their sound with every release.

2016’s Terror Firma put the band on the map as a brutal and technically competent, if unremarkable, player in the scene. Production, songwriting and technicality were all dialled up for 2019’s Kingdom of Lies, and 2021’s release has not so much as turned these dials up further as it has moved them to a new level completely.

The biggest change to the band’s sound in Loss can be described quite uselessly as maturity. But what does that even mean?

Well, I touched on songwriting earlier. No longer does each track sound like just a collection of interchangeable sections. Previously (and common in the genre), you could cut and paste verse, chorus, breakdown etc from one song to another and it would likely fit and sound fine.

The 13 tracks on Loss more or less stand on their own. This is thanks in no small part to greater attention being paid to crafting riffs that are actually catchy and memorable, while remaining heavier than my regret after a night on whisky and tequila.

Roper’s vocals also do a great job of giving each track a sense of continuity. Gone are the frenetic shifts in style, replaced by higher screams playing counterpoint to a demonic low growl. 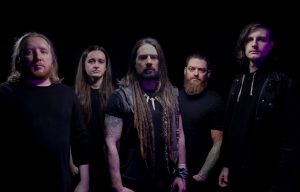 The whole album sits just shy of 50 minutes and while it does whizz by, I couldn’t help but feel that after ten tracks I’d heard enough. Maybe this is me showing my age though, as I can’t pinpoint anything in any of the songs I would cut.

At the same time, the last two or three tracks don’t add anything different to the band’s sound. This is very polished, technical and brutal, but it’s still deathcore. I don’t mean that as a pejorative. If that’s your thing I doubt you will find fault with Loss and will ridicule me for seeing more brutality as a negative.

Like Unique Leader, Osiah goes in harder with every release. Unlike labelmates Humanity’s Last Breath, who are not happy to sit within the confines of the genre, Osiah are making themselves pretty comfortable, and Loss should be the album to shoot the band into the consciousness of every beatdown loving, pig squealing deathcore fan out there. How’s that for a KPI?

Loss will be released on May 7th via Unique Leader Records. You can pre-order here.