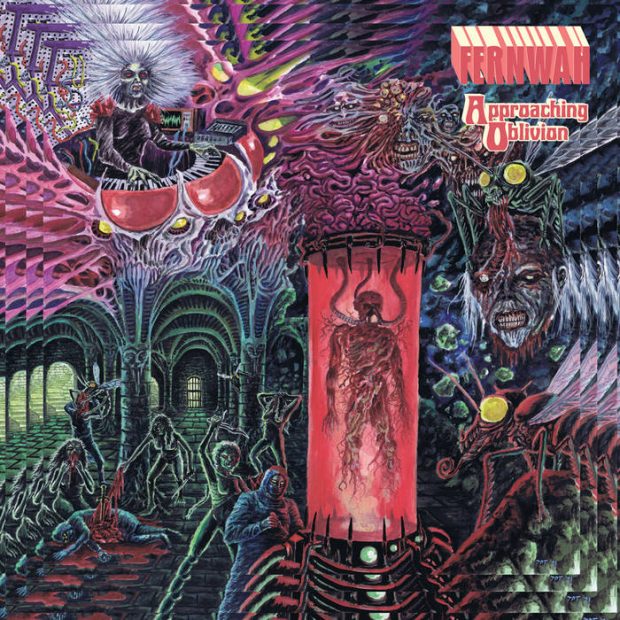 Saying “heavy metal can get pretty dark” is sort of like saying that water is wet. It’s a take colder than the frozen wastes of Blashyrkh. And, of course, that’s what we like about it. I enjoy minor intervals and anguished shrieking just as much as the next girl. But occasionally I like to give the ol’ noggin a break and dip into something a little lighter. And Fernwah scratches that itch nicely.

Approaching Oblivion is a pretty eclectic album. It puts a lot into its fairly short runtime, running the gamut from straight death metal to progressive rock. There’s death growls and clean singing both, there’s samples and synths throughout. That might make it sound a little disconnected from itself, but Fernwah actually incorporate everything pretty nicely. The result is a delicious aural stew that is, quite frankly, just plain fun to listen to.

The first thing I want to note: there are not a lot of vocals on this album. Except for two songs, the album is almost entirely instrumental. And that’s one of the things I like about it, because it throws the impressive riffs into sharper focus. From the clean guitar intro that starts us off to the leads on “Amulet” and “Vertigo of Freedom/Individuality Rendered,” the guitar work on this is superb. It’s bright and proggy, unique and experimental while still being accessible and easy to listen to. It’s something you don’t really have to think about, don’t have to concentrate too hard, you can just sit back and enjoy it.

Now, this is still a death metal album, and it’s still plenty heavy. One of the strengths of this album is how seamlessly it transitions between its different parts. You have the aforementioned intro to the album, a downright catchy guitar passage that lets you know right away that this ain’t your granny’s OSDM worship. The next track, the title track, switches effortlessly between palm-muted riffs and slick leads, providing the link between the intro and the third track, “Leaking Out” which is a straight death metal song (and features death growls from Devin Swank of Sanguisuggabog). The fourth track dials down the heavy just a little and ends with a sample that cleanses the palate for the end of the album, where Fernwah go full prog.

In short, Approaching Oblivion manage to combine a lot of disparate elements into something that works really well. There’s something here for everyone, especially if you like your music weird and experimental.

HPGD released Approaching Oblivion by Fernwah on 31st December 2021 and you can stream or buy it here.