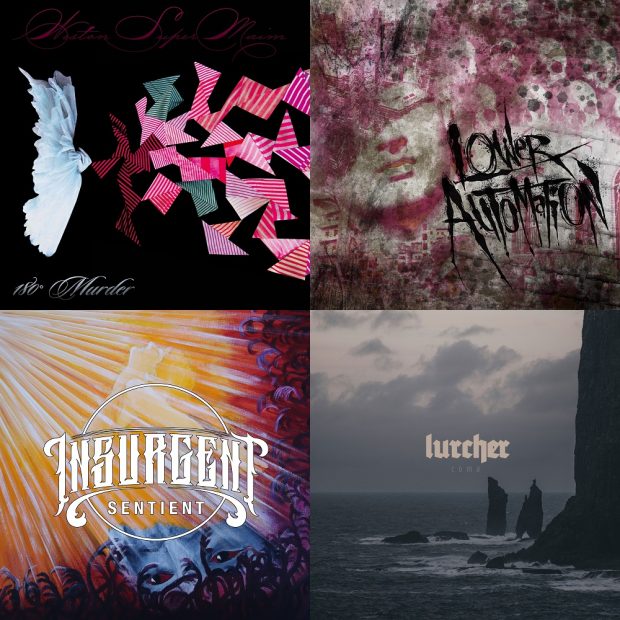 And we’re back! Another instalment of A Certain Taste EP Roundup, where I look ahead at stuff I pretend is an EP if it lasts less than 30 minutes, whether the artists themselves call the release an EP or not.

This time we have 22 tracks split over four releases that will take you less than 90 minutes to listen to from front to back. We’re covering prog rock, mathdeath(?), grungy stoner and angular post-hardcore so strap in and buckle up!

There are a few bands I regret not being able to see. At The Drive-In announced a tour then broke up shortly after so that never happened. I actually had tickets to see Glassjaw in London years ago but gave them to a friend because I had no way of getting there. I also had tickets for The Blood Brothers in Glasgow but again I struggled to travel, then they broke up.

Fortunately for me, Lower Automation has burst in with a voice like In Casino Out Cedric Bixler-Zavala, Johnny Whitney and Jordan Blilie and music to match. Yeah I know, it’s a headfuck. But it really works.

There’s a noise-rock vibe here but I refuse to believe there were wider influences for this record outside The Blood Brothers and early ATD-I. That’s all I hear. This is not a bad thing at all. In fact, it’s wonderful. From start to end, Lower Automation is an absolutely chaotic post-hardcore-tinged record that I’ll be listening to for a long time. Hopefully, they make it over this side of the pond now that I can drive.

I watched a video a while back where a music PhD talked about an academic paper he had published on a rhythmic analysis of a Dillinger Escape Plan (DEP) song. He looked at the official tap book as well as other tutorial or analysis content and found them all to be slightly different to the actual recording. He suggested that the song was not actually played to any sort of time signature at all. That’s just too much madness and chaos for some, but the exact right amount for so many metalheads. I can imagine this includes Weston Super Maim.

I can’t say that I like the name of this band, but I do appreciate the wordplay. I also appreciate the melding of influences on display. Upon hitting play on this two-track EP, you’ll instantly be slapped with Meshuggah, then Car Bomb, then DEP then back to Meshuggah. It’s an addictive mix of influences that they nonetheless manage to make their own.

The second track on offer sees the band take more of a post-metal approach before diving back into the angular chun that djent fans will recognise instantly. The melding of these two approaches, adding melody to heavily syncopated drums, means the listener is never overloaded with stop/start janky noise and I would love to hear what else the guys can do with this.

What do you get when you cross a dad with a man who only ever told dad jokes regardless of offspring? This guy. I wanted to write something funny here to lead into talking about Insurgent’s debut EP, Sentient. It actually stopped me from finishing this article for a week. I couldn’t come up with a joke to tie into the themes on this EP. Then I realised it doesn’t make any sense to take this approach and would be a waste of time. But do you know what does make sense and isn’t a waste of time? Listening to this EP.

When the promo dropped in my inbox as FFO Jinjer and Tesseract I thought I knew what I was in for. Light prog guitar wankery with female vocals, right? Kind of. Where so many bands of this ilk fall short is that they rely far too much on their strong vocalist and the songs themself are simply not interesting enough to hold attention. Insurgent has riffs for days. Really catchy, fun riffs too. Then they add an incredible vocal performance over the top just because they can.

There was a viral tweet making the rounds on metal Twitter recently of someone saying there are no good metal songs. An idiot, I know. But the thing is, I sort of understand where he’s coming from. For a lot of people, metal is one specific group of bands and if you’re not into them then you might indeed think metal sucks. If you know someone like this, let them hear Sentient and blow their fucking minds.

I’m sorry this wasn’t funny, I’m all out of jokes at the moment. One more record to look at though.

Lurcher presents here four tracks of grungy bluesy stoner rock that hits you in the chest and makes your spirit groove. Vaguely Mastadon-esque riffs are backed up with at times frenetic drumming and fantastic clean vocals over the top – it’s as if the rasp in his voice is right on the tip of his tongue, so to speak. While not usually the sort of thing I would listen to, never mind cover, I really enjoyed my time with Coma.

Doomy stoner rock bands often lean very heavily on the blues roots of the genre which to my ear makes them all kind of sound the same. What Lurcher do to change this is to borrow liberally from other adjacent genres to craft interesting and exciting songs. Sure they have kept that fuzz alive and well in the mix, but with a touch of grunge attitude here, and a smattering of classic rock soloing there, we have a very strong and fun EP for those who like to rock.