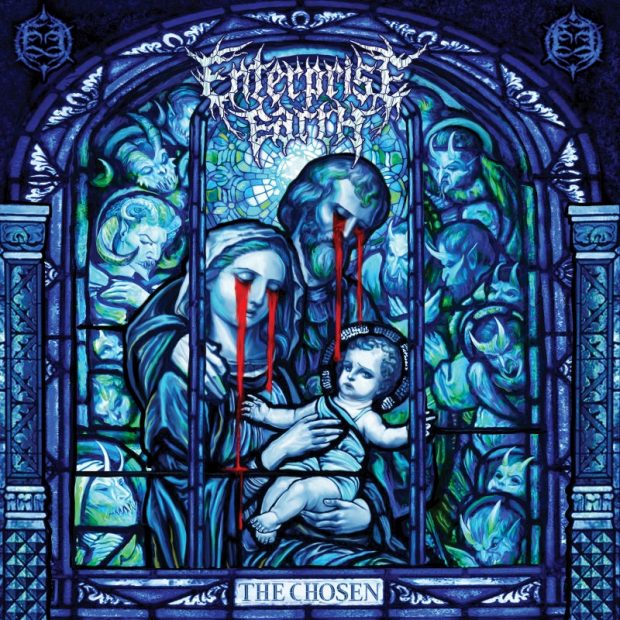 January 14th sees the release of multiple deathcore records and I have managed to snag three of these for review.
First up we have Enterprise Earth and their new record The Chosen. The band are now six years into their career and this being their 4th studio album is easily their most accomplished.

The Chosen isn’t a straightforward deathcore record like their previous works. Although 2020 EP Foundation of Bones did hint that the band could operate on a different level with an acoustic track.

We have the introduction of cleaner vocals which is obvious from the opening track Where Dreams Are Broken, with its incredible sing-along chorus which is not something I would normally associate with the genre. However Dan Watson is a top tier vocalist in the scene and seems to have found a sweet spot with this high ranged scream/singing voice: the melody and catharsis of his voice is really a huge selling point.

Being familiar with Dan’s other work with Infant Annihilator and Mire Lore, it’s such a great move to show off his vocal talents and how they are not just limited to low end gutturals or his high pitched blackened style. The contrast between his lighter, softer side and the powerful low end is no more obvious than on the acoustic interlude/bridge track Unhallowed Path into Legends Never Die – it’s night and day, but the contrast but works flawlessly.

The record itself is hugely varied, not just vocally but musically too. Its run-time clocks in at a svelte 1 hour 7 minutes. This is largely in part to longer songs, seven of the 14 tracks exceed five minutes in length with some tracks being over 7-8 minutes long. The result is more technical elements with guitar solos (Unleash Hell & They Have No Honour) and hugely impressive composition and songwriting on certain tracks. The record has a symphonic, almost epic, quality to many of the tracks.

Certain tracks do fit the deathcore blueprint and won’t have the clean vocals, a solo or some of the djenty guitar tones which are prevalent on the album. Overpass is one of the lengthier tracks and starts off like an Alice in Chains style grunge ballad before moving to Chester Bennington territory with its chorus before going into a deathcore style with its downtuned riffs, then we get hit with a solo before a slower paced ending with an earth shattering breakdown to end with that comes back around again just to finish the job. Tracks like this just go to show the range of talents the band have and how they cannot be pigeonholed as a deathcore band.

The production on the record is fine, guitars and vocals really dominate, the latter soaked in reverb for a lot of the clean sections which is nothing new or negative – the drums were tracked by Jason Suecof elsewhere whereas the rest of production was done by Gabe Mangold – the Enterprise Earth guitarist.

Although the record is a departure from the true ‘core sound it still has enough moments over the run-time to please the purists. Like many bands who have altered their sound and veered away from their roots there will be a resistance to the change but to me the progressive sounds and the confidence in which the band have turned up and knocked this out the park is something you can only admire.

Enterprise Earth will release The Chosen via MNRK Heavy on Friday 14th January. You can pick it up here.