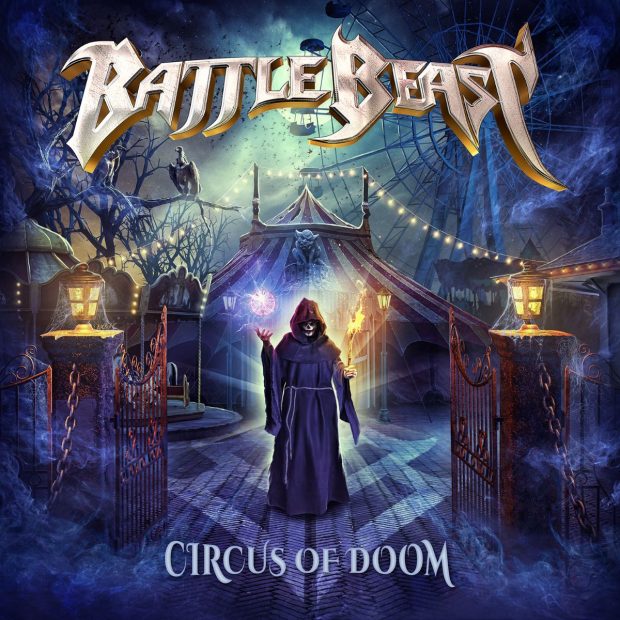 The concept of playing pure old-fashioned metal is something of a tightrope walk (and I promise that’s my last “circus” analogy). If you stay too pure, there’s an argument that you’re being redundant and endlessly retreading old ground, but if you switch up the formula too much, you’ll lose what makes you pure, and alienate the fanbase. Getting the right balance is something that few bands with any longevity manage, but that almost all struggle with.

Battle Beast, since its formation in 2005, has been through a lot of radical personnel changes. In 2012, they changed their singer and then, in 2015, guitarist/songwriter Anton Kabanen left the band to form Beast In Black. Despite these seismic shifts that may have broken lesser bands, you can still trace a very clear line from their debut, Steel, all the way to Circus of Doom, their sixth full-lengther. It’s unmistakably Battle Beast and Battle Beast at their most defiantly Battle Beast to boot.

However, it’s maybe not been the straightest line to draw. While they retain this distinctive identity, they’ve also refused to be stuffed into just one pigeonhole. While some fans were shocked when they brought (say) outright Euro-disco to 2015’s Touch In The Night, others – like me – drew Battle Beast closer to their heart as a result. I’ve always enjoyed bands who combine accessibility with a bit of wilful mischief, bands who confound audience expectations just because they love more than one kind of music and want to channel that. Unfortunately, said bands often end up in the same place; with a passionate hardcore fanbase that ‘gets’ and loves them but less of a casual, wider audience.

Circus of Doom feels like a bid to change that for Battle Beast. It feels like a refinement of everything they’ve been doing since the start. They’ve streamlined the experimentation, picked a lane – the “massive power metal anthems” lane – and hit the gas at full pelt. There’s not even so much as a ballad here (which is almost a shame, because the tender and heart-wrenching I Wish was a standout on the last album). It’s just one huge singalong chorus after another, soaring major key melodies, massive symphonic arrangements and production so slick it makes Bon Jovi sound like Boris. There’s choirs, there’s bells, there’s strings, there’s electronic bleeping and blooping, layers and layers of guitars, relentless 16-beat drumming, screaming synths… It’s packed to bursting point and towering above the cacophony, there’s always Noora Louhimo, whose classic gritty rock vocal lends emotion and punch to every lyric it touches. When she sings “I can tear down angels from the sky and make Mona Lisa cry”, you’d best believe it.

Beyond refining their knack for a brilliant pop melody, Battle Beast have also refined their lyrics over the course of their career, moving away from fantasy/anime themes into more personal territory. There’s some great stuff in here, mostly revolving around universal themes of empowerment and escapism. Lines like “I’m lighting up horizons with thunder and lightning, through the darkest skies, where even angels fear to fly” are guaranteed to get even the most jaded metalhead’s pulse pumping, especially when belted out by the superhuman lungs of Louhimo.

There are a couple of times where Circus edges slightly too close to what’s come before (e.g. lead single Eye of the Storm is way too reminiscent of 2017’s Beyond The Burning Skies) but for the most part, this is an addictive and mightily impressive listen. Clocking in at 42 minutes is a wise move as Circus of Doom never outstays its welcome or lets the energy levels drop. You’ll just be cleaning the last chorus out of your ears and catching your breath when another burrows right into your brain and gets you breathless all over again. I know I’ve said this about three different ways already but, unlike this review, there’s simply no messing around here. There’s enough Battle Beast character to please the hardcore, but the lean and direct approach should attract a whole new crowd to run away with the circus.

Nuclear Blast released Circus of Doom by Battle Beast on Friday 21st January. You can buy it here.