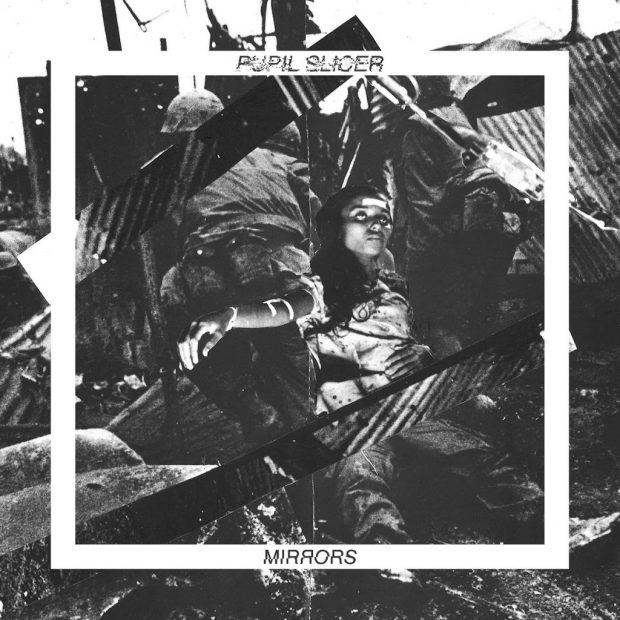 It feels like I have to say this regularly but there are just so many albums and artists that have passed me by over the years that I have no idea why a certain band or artist is getting mad hype from the press.

Well, I have not been paying attention.

There were a couple of these in March. Different corners of the music journo world were shouting about Pupil Slicer, Mare Cognitum and Midnight Odyssey at seemingly the same time.

One released their debut album, another is a solo BM project singing about space and the stars and another released part 2 of a series of work, clocking in at close to two hours.

So which is which?

Which one is a bit shit but journos spaff on about regardless, and which are genuinely good enough for people to be raving and writing about them in their own time?

Trick question, turns out they are all fucking brilliant! 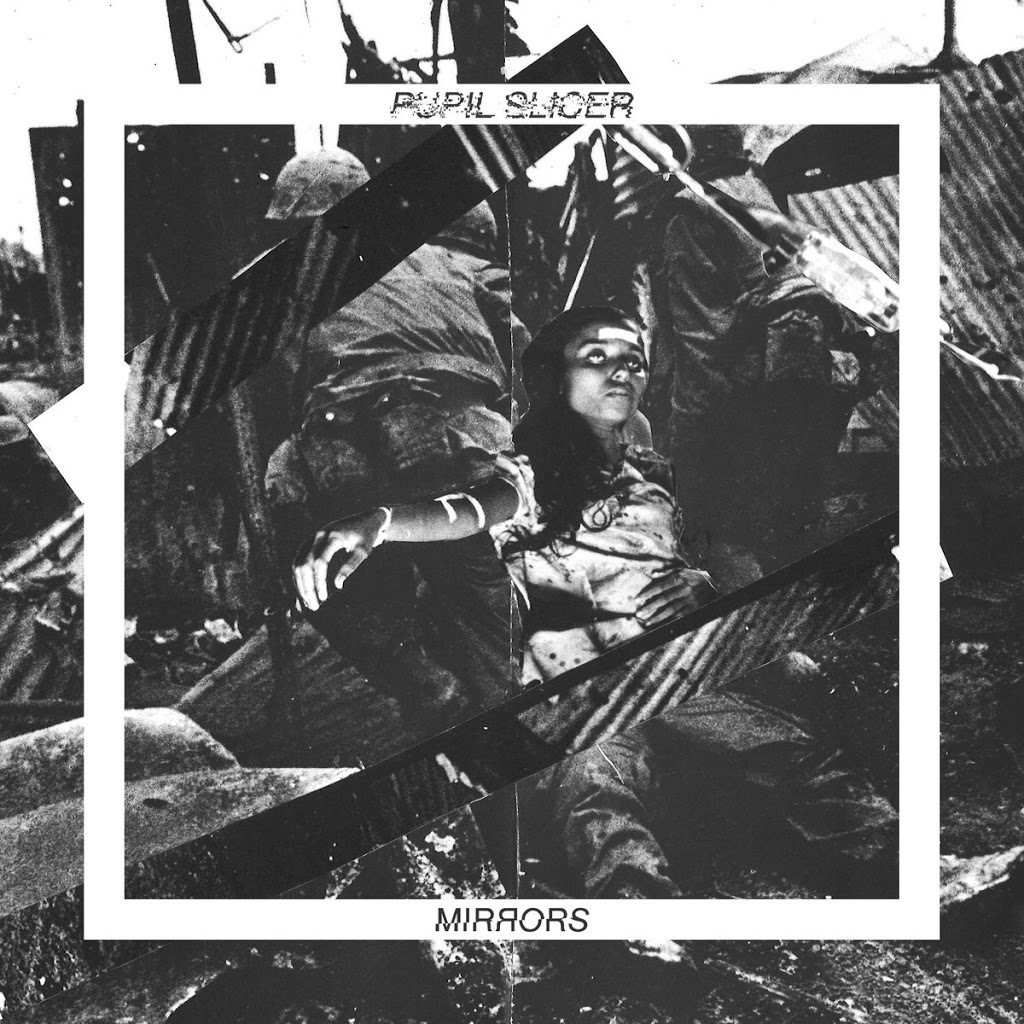 Whenever something is called mathcore, the comparisons to both Botch and The Dillinger Escape Plan are never far behind. Rarely are these comparisons more apt, however, than when applied to Pupil Slicer in the wake of their debut album, Mirrors.

If I had to describe the sound of Mirrors I would simply grunt “dun-dun-dudun-dun-dun-dudun” while headbanging in 6/8. Pupil Slicer treats the fretboard like a plaything and sees time signatures are mere concepts they can adopt or drop at any moment. They use that trick of playing in odd time signatures while also throwing the accent points around from bar to bar to make it sound even odder to great effect.

Carson Pace of Callous Daoboys fame shines in his guest appearance on L’appel Du Vide, which includes what I assume is his best Rick Flair impression at the start. I think the reason Carson fits so well here is that his vocal style matches brilliantly with Katie Davies’ unhinged and desperate screaming.

One thing a lot of bands do not pay enough attention to with their debut, and something that can make or break an album in an age of infinite distractions, is the pacing of the tracklisting. Pupil Slicer appears to have effortlessly nailed this side of things. Mirrors bounces between shorter D-beat grindy tracks and meatier tracks such as Husk or Wounds Upon My Skin where the breadth of ideas present across the whole album can really be felt.

A fantastically dizzying maelstrom from start to finish. 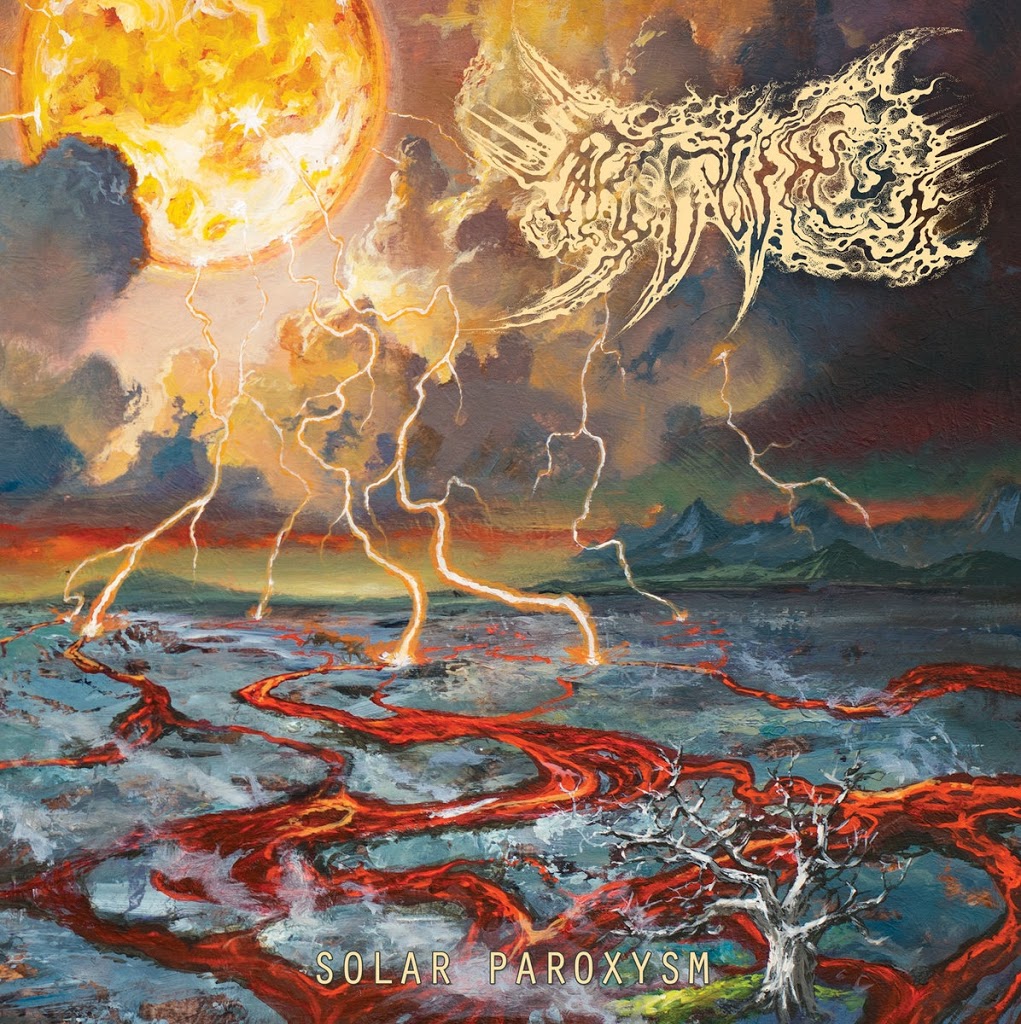 There is no shortage of solo black metal projects. Every release day I sift through a bunch and immediately cast them aside. Truthfully, most of this is uninteresting and derivative faux kvlt noise. You might think that the sheer volume of dross would make the mediocre sound incredible by comparison. The thing is, there doesn’t seem to be much of a middle ground. You either get very poor solo black metal, or you get stuff like Mare Cognitum.

Jakob Bukzarski has been plugging away releasing music as Mare Cognitum for 10 years now, with (now) five albums and three splits, including 2020’s Wanderers: Astrology of the Nine with Spectral Lore, under his belt. As I said at the top of this article, and as embarrasing as it is, there are a lot of acts that completely passed me by. Mare Cognitum is one of them. So this is all based on this single album and not in the context of their wider body of work.

The theme for this album is looking back at the failures of modern man, and the absolute mess we’ve made of this planet and ourselves. Clearly on display with the cover art showing a dead planet, and in the aptly named Terra Requiem, the theme runs through the lyrics a little subtler across the rest of the album. I think it’s noteworthy that we not only have here a skilled musician who has chosen black metal as his canvas, but also he has a very clear purpose and message to convey that isn’t just general hatred or pretend Satanism.

Musically I was blown away by the detail in these songs. There are layers of guitars that neatly compliment rather than compete with each other to form an absolutely massive sound and atmosphere.

It is a huge compliment to say that I am not confident in my belief that this is programmed drums. Whether Jakob has played or programmed these drums seems less important when you consider the skill required to create drum parts that sound this good.

From start to finish, Solar Paroxysm takes you on a journey. You’ll hear the absolute fury of a man frustrated at being trapped on a dead planet, along with the brooding and melancholic atmosphere that accompanies his contemplation. This is packed with riffs and ideas that would provide lesser bands with two album’s worth of material, and delivered with such clarity of vision and force of conviction that it’s both astounding that this is the work of one man and could only be so. 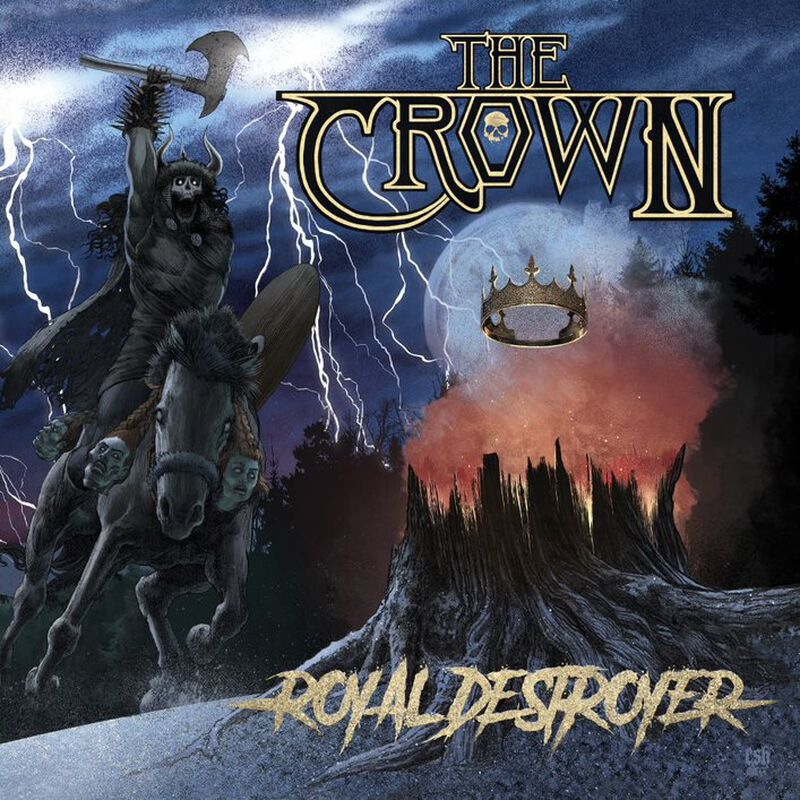 I love music that tells a story or follows a concept. I love getting lost in the worlds that music can create. But sometimes you just need some fast, heavy, fun metal. That’s where The Crown come in.

11 albums in and these Swedes are still blasting out fun, unpretentious death thrash. I’ve had this on in the car a bunch. Volume up, pedal down!

This isn’t an album where you can point to certain standout songs, or dive deep into the production or composition. Do you like fast and heavy death metal? If so, this is an absolute no-brainer.

Royal Destroyer is not going to win awards for originality, and most of the songs could do with dropping a chorus to tighten them up but none of this ruins the fun. 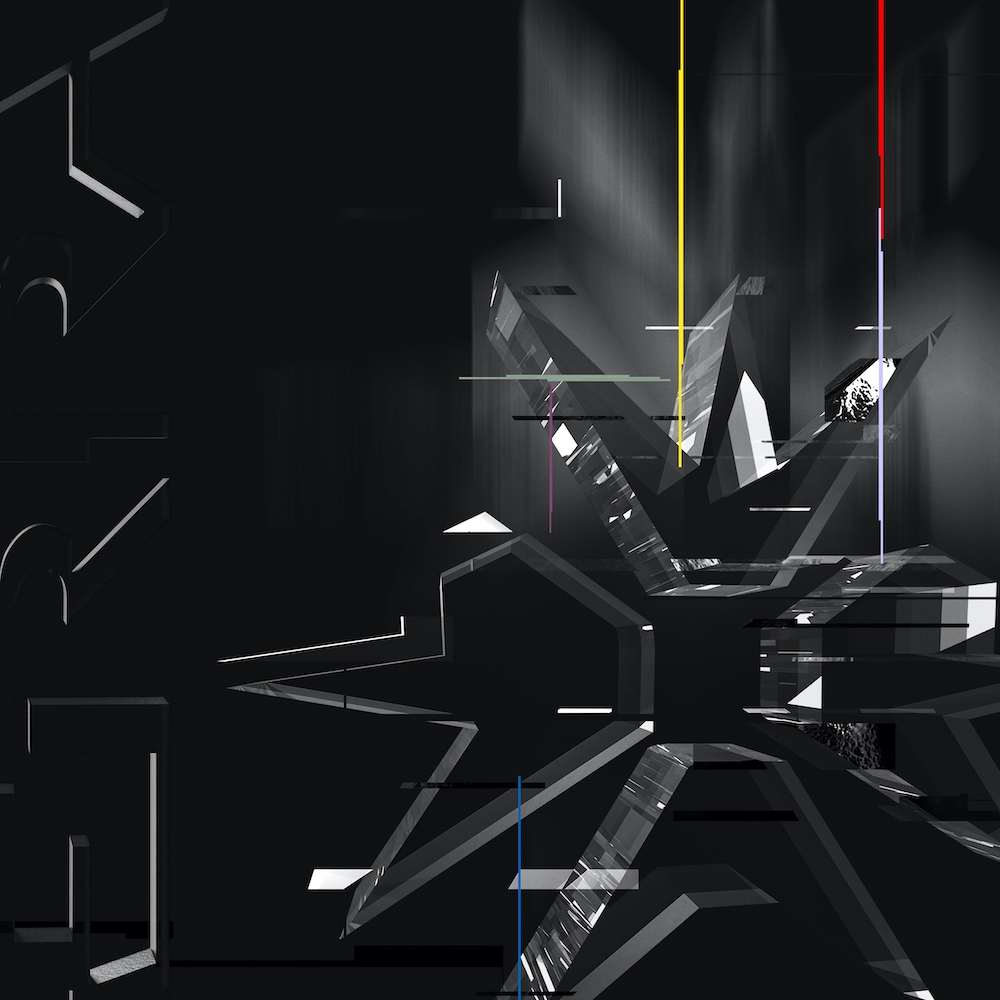 Progressive metalcore outfit ERRA are back with their fifth album. After a few mediocre records, metalcore fans were hoping this would be a return to form, and I would be surprised of any of them are disappointed.

If we break things down at the genre level, this is proggy djenty metalcore, so expect to hear an odd-meter rhythmic chug with clever footwork from the drummer to follow along, followed by melodic, clean singing sections. It is metalcore after all so you can expect to hear a beatdown at some point too.

This obviously does a disservice to ERRA, but the above will be enough for some to know that this isn’t for them. This record does not reinvent the genre, and ERRA don’t do anything other bands such as Veil of Maya or Misery Signals haven’t done before. Instead, they are raising the level and setting a new standard for everyone else to work to. This album will be the benchmark for all metalcore releases this year. “Yeah it’s solid, but is it as good as ERRA?”

Bands implementing dual vocals tread a fine line, one which ERRA themselves have struggled to toe previously. Not this time. Cavey’s screams and growls carry plenty of punch, and Jesse Cash’s clean vocals are strong enough and have enough range to be effective. The interplay between the two is great to hear, but they split the harsh/clean vocals 40/60, and some fans will bemoan the increase in clean. Personally I think it gives both guitarists more space to explore and build up layers, as well as matching Cash’s vocals more closely.

Erra clearly know how to write hooks as well. Not just a cool vocal melody or a solid catchy riff, but full hooks. This is helped by a fantastic guitar tone throughout, but every instrument and both vocalists often play an active part in what makes ERRAs hooks catchy compared to just having the lead guitar do all the work.

This isn’t actually a strong album from beginning to end. I did feel the pace and my interest flag towards the end. Perhaps too much of a good thing? Vanish Canvas and Memory Fiction are slower tempo melodic numbers with little interesting going on, while Eidolon is a generic version of far more exciting tracks elsewhere on the album.

I know my opinion here isn’t shared widely in the scene, and other reviewers have given this 8’s, 9’s and 10’s. I would say 7/10 if I scored things. It’s a very strong album with a tonne of interesting ideas and clearly their most mature-sounding record to date, but I can’t give full marks to a 12-track album that has three songs I skip. Still, Snowblood and Gungrave are both early contenders for song of the year, and there’s plenty to love elsewhere. 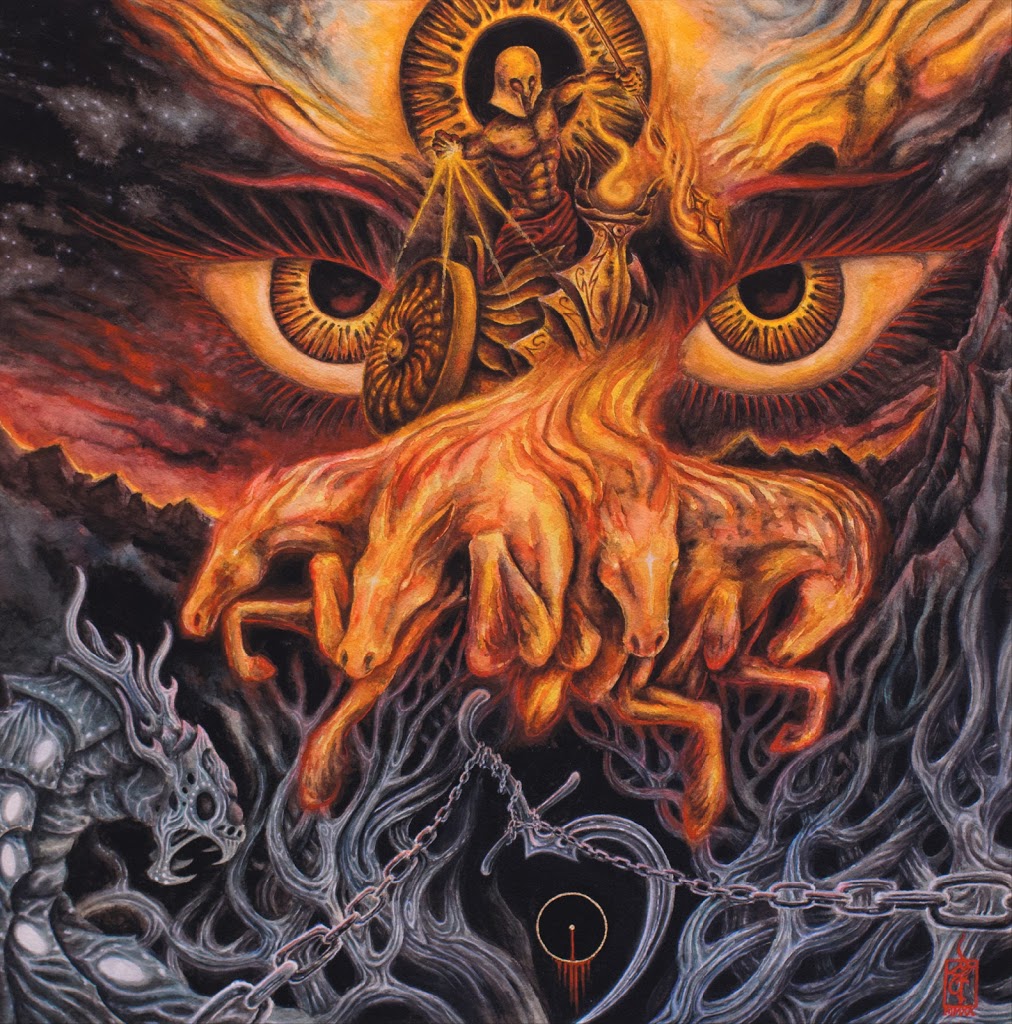 Another album from a solo act on I, Voidhanger but this one is harder to pin down. On paper, this is an epic doom follow-up to the story that sole member Dis Pater started on Biolume Part 1 – In Tartarean Chains and the second in a planned trilogy. In practice, this is a complex, sprawling beast that is likely to take a lot of patience and time to sink in.

A lot of music is written with a dream for wide recognition, but I can’t imagine Dis is under any illusions in this regard. Midnight Odyssey’s music is written for a very specific audience who are more than happy to listen to an album that runs just over 100 minutes about the overwhelming and unbearable heat of a star.

Musically, The Golden Orb is a symphonic, droning gothic doom journey akin to the score for a fantasy epic, with little evidence of the black metal that fans of Midnight Odyssey’s may have been expecting. While you may think that sound might have been fitting with the theme, I have felt punishing heat and I didn’t feel very black metal, I felt more like this record sounds.

There are negatives, as might be expected from a 9 track album that runs at over 100 minutes. Album opener Dawn-Bringer sits at 20 minutes and genuinely could be half of that without detriment to the record as as a whole. There are a few other moments through the album like this too,  where chunks could be hacked off with no negative effect in my opinion.

I was torn about adding this album here. But if I look at what I’ve listened to the most over the month, Midnight Odyssey is up there. I’ve listened to this three times all the way through, and that in itself is a searing approval. There is absolutely no way you listen to The Golden Orb for six hours if you don’t enjoy it.

You can easily get lost in the storytelling on the doomy pagan stomp that is Eigenheid, despite it being sung entirely in Dutch. The outstanding vocal performance takes this already strong album to another level.

I’ve included Midnight Odyssey instead of Stortregn as one of my five picks for March but this has chopped and changed depending on my mood each day. While they use technical death metal as a starting point, Stortregn bring in wide influences from trad heavy metal to prog to latin music to create something that comes close to transcending the genre.

Again, you can check out the Spotify playlist here.