While death metal may seem like a fairly straightforward genre to outsiders, fans know that it encompasses all manner of subgenres. As time goes on, these often combine to create new hybrid styles and the definition grows ever more complex. In an effort to simplify things, I posit that we no longer split death metal by subgenre but instead classify it like linguistic tenses. For example, the early, thrash-influenced sound of Death or Cannibal Corpse is Death Metal Past. The extreme technicality and sheen of a band like Origin or Obscura are Death Metal Future. Bands like In Flames, who implement melodic or metalcore influences, can be Death Metal Present. You’ve got label-defying gonzoid bands like Pig Destroyer who is, like, Death Metal Preterite or something. But Wombbath, with their latest album Agma? That’s Death Metal Perfect. Everything is exactly how it should be.

All laboured metaphors aside, Agma is a monolith of a record that blends the band’s vast collective experience with a renewed energy and invention. It seizes influences from right across the genre board and crafts them into something epic and spectacular. A 16-song double album feels potentially ostentatious but Wombbath manages to justify the length with not just musical diversity but with consistently incredible songwriting. 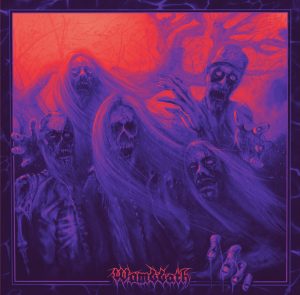 Opening track The Law Of Everything kicks the door down straight away, delivering an old-school belter that sounds like peak Sepultura, all righteous fury and catchy growl-along hooks. Then it’s straight into At The Giant’s Feet, a more grandiose offering of minor-key splendour with sinister clean vocals wailing away in the background like King Diamond at a nun’s funeral. Inquisition Reborn has an almost power metal arrangement in the chorus but it’s soon demolished by the savage barrage of blastbeat fury that starts Blindly They Follow. The Age of Death throws in swathes of orchestration to achieve the kind of Satanic majesty suggested by Agma’s cover art. Departure From The Light is just one of the hugest, most intense melodic death metal songs I’ve heard in years, evoking Deflorate-era Black Dahlia Murder, a high compliment indeed. There’s even an acoustic passage and choirs that make a song with a name like In Decay They Shall All Fester far more beautiful than it has any right to be.

You get the idea. That’s just a handful of highlights, but it’s like for each song there’s a countersong contrasting it straight afterwards. Agma flows so well, it’s clear how much thought has gone into making this a single immersive listen, which is rare in the Age of Shuffle. Each song’s strengths – be it beauty, brutality, complexity or simplicity – bounce off one another so you never feel like the record’s repeating itself but rather just dragging you deeper into its infernal labyrinth.

I do think we’re living in a new golden era of death metal right now. Wombbath were around for the first one in the early 90s but never quite made their mark. They came back about five years ago with a handful of decent new releases but were always just good. Sadly, in a saturated market “good” feels somehow insufficient, but Agma changes all that. It’s a monumental statement of intent that demands immediate attention. A late-career highlight that subsumes everything that’s come before and spits it out as molten sonic lava.

Where this all came from, I have no idea. Was it the newish line-up finally settling into place? Was it the effects of the pandemic (the nihilistic apocalypse worship of the lyrics suggests maybe!)? Or was it just their time at last? I have no idea but Wombbath has created a genuine modern masterpiece in Agma. It’s easily one of the stand-out releases of a fantastic era in death metal. Death Metal Perfect! You heard it here first!

Before it is released on 31st December, you can pre-order Agma by Wombbath from this location where you can also grab the digital version for only a few bucks! Can’t say fairer than that. Thanks, Transcending Obscurity!