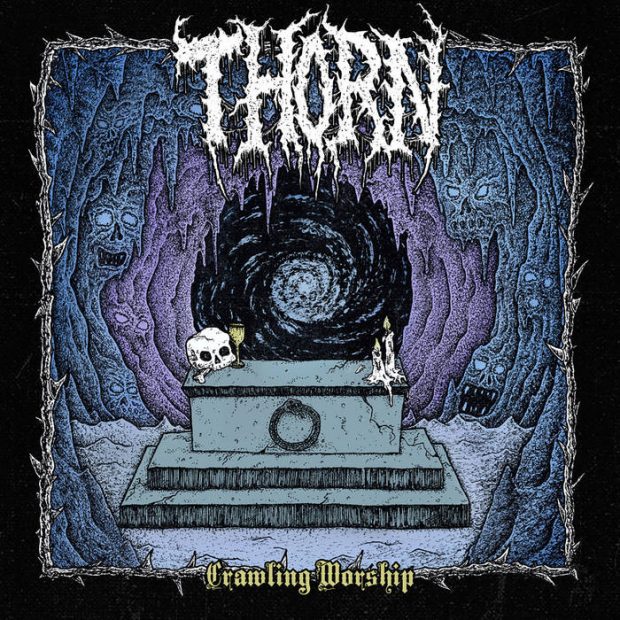 For the life of me, I can’t remember how I came across Thorn, the solo project of Brennen Westermeyer. It has to have been through Bandcamp or Twitter but the name of whoever recommended it to me has been lost to the sands of time. This is a real shame because that person deserves my thanks. And if you listen to this record and enjoy it, yours too. If Thorn had their way, your thanks would go to Satan. Everything they do seems to be in service to the personification of evil. Unlike Nazis, Satanists actually have a reasonable track record when it comes to putting out music. Brennen has ensured that Thorn is added to this list.

In this debut album, Crawling Worship very neatly combines the slow, melancholic chord progressions of doom with skull-crushing, club swinging, caveman death metal riffs. The second track Behemoth Awakened demonstrates this well, with frenetic Cannibal Corpse style opening riffs shortly making way for mournful doom. The special weapon utilised to do this is the wailing lead guitar that accompanies many sections. The tempo shifts underneath while the shred continues.

This approach allows Thorn some freedom. While the structures for these songs are broadly similar, the listener is kept guessing about the song’s direction. We could transition into a groove-laden neck snapper of a riff, or we could hit a slower, doomy passage.

There are moments throughout the album where you’re allowed to catch your breath though. Title track Crawling Worship’s mid-tempo chug is a fitting tempo, and when combined with the following track Respite: An Oath, gives your neck a well-needed break. It’s in these moments that you can recognise the artistic growth in Thorn.

The death/doom split between tracks and within songs was present on both the debut EP The Encompassing Nothing and the follow-up split with Fumes, but there was no real “in-between” in the pacing, aside from the track Returning To Dust. Being able to present tracks that change the tempo while still sounding like the evil death/doom that we expect from Thorn is a great step forward.

Overall, the production has also improved, with the drums, in particular, sounding far better than they did previously. Don’t get me wrong, they still sound programmed, but what has been written sounds far more natural. A wholly organic drum sound would not be appropriate but the kick cuts through the whole mix to the point it’s often hard to hear that there is actually a bass guitar being played as well when the double kick is thundering.

Some things have not changed at all: Brennan’s guttural growl and satanic lyrics. The whole album appears to be about summoning a demonic figure which you can probably work out from the artwork and track names. His vocal style works perfectly for this. For added effect, the ambient passages on the album are accompanied by Aleister Crowley poems. A nice thematic touch.

Since I got my hands on this album I have not stopped playing it. For better or worse, depending on your tastes and preferences, this is a very straightforward and uncomplicated listening experience. Thorn aim to crush your skull and offer it up to the Dark Lord with both their palaeolithic approach to death metal or the unrelenting weight of their doom. There is a time for complex and challenging music, but if the output is as strong as this, I can always find time for Thorn.

Crawling Worship is released on the 18th of June. You can grab the digital version here. Life after Death and Gurgling Gore are putting out the CD/tape/vinyl between them.