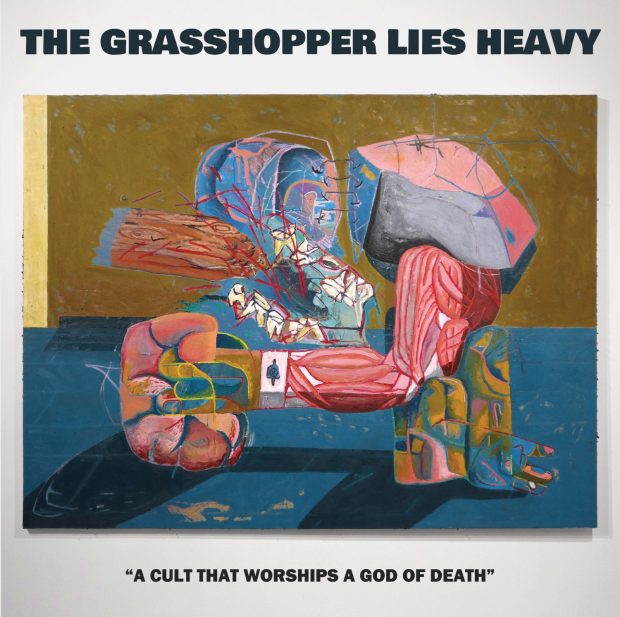 The Grasshopper Lies Heavy is what Boris Johnston uses as a masturbatory aid. It features in The Man in the High Castle as a “book within a book”, exploring what may have happened had the Nazis been defeated in an alternate universe. For one, Winston Churchill doesn’t end the war only to be ousted by Atlee (who carried out a radical Socialist programme of building loads of houses and giving people healthcare free at the point of use). No, he carries on for ten more years as the leader of the British Empire. An Empire which does not free the colonies from the yoke of oppression and British rule but instead cracks down even harder. He then takes on America and wins, leaving the British Empire as the only world superpower. After first reading this, I heard that Boris can now only climax if you sing Rule, Brittania and present him with a butcher’s apron to finish on.

I wrote all of that before I’d even heard A Cult That Worships A God Of Death, the 9th release from post-hardcore quartet The Grasshopper Lies Heavy (TGLH). But we don’t waste words around these parts so I am absolutely not deleting any of it. Anyway, it’s related. It allows me to say that TGLH also exists in an alternate universe. They explore what may have happened if Breather Resist had not broken up in 2006 to form Young Widows and had instead simply kept releasing Jesus Lizard-infused hardcore.

What a beautiful segue.

I don’t mean to be reductive but if you wanted a single sentence description of this band and album then I’m not sure you can do much better than that.

There is a strength in this sort of reduction though. To get it right, you have to accurately whittle down something intricate and complex to a succinct yet accurate depiction. I’ve just done it using words, but TGLH has also taken the time to helpfully do this with a few tracks on the record. At under three minutes each, The Act Of Buying Groceries and The Pastors Pockets are mere morsels compared to the meatier cuts found elsewhere. If you want to feel the claustrophobic weight of what this band can do but you don’t have time for the full waterboarding experience, these two songs reduce the essence of their sound, presenting a concentrated taste of what they can do.

They are not just a Breather Resist clone, of course. That’s quite rude. Over the course of their discography, TGLH has experimented with ambient, post and noise rock as well as solid mathy post-hardcore. On A Cult That Worships A God Of Death, the band use all of these tools while taking aim at Christianity and capitalism. Although this only runs to 36 minutes, the band have done a great job of making this feel a lot longer (in a good way) by mixing up the different influences and styles they play with. For example, Charging Bull at the start of the record is reminiscent of the more radio-friendly Dillinger Escape Plan songs: still up-tempo and frenetic, but controlled. Towards the end, the song verges into post-rock territory, setting up the approach taken to some of the longer numbers.

Later in the album, we get the title track (all four parts of it) which further explores this melding of frenetic post-hardcore with spaced-out post-rock. This approach allows the track to breathe, giving the impression of a small idea, a meme, slowly writhing and growing. Evolving. Building. Changing. Then boom! Bossk is the absolute master of doing this. Take what Bossk do and add post-hardcore leanings, some noise and a dollop of The Jesus Lizard and you have A Cult That Worships A God Of Death by The Grasshopper Lies Heavy.

To my ears, there’s too much of the meandering and not enough of the frenetic. TGLH are at their best when they combine the two, but the balance here is a bit off for me. It leaves the album feeling far more suffocating and claustrophobic than it could have been which diminished my enjoyment. In other words, they sludge more than they slap. This hasn’t put me off listening to this multiple times but it is something that will put off a lot of people who come in off the back of the singles, expecting mathcore. At the same time, the band have covered The Jesus Lizard for a compilation previously- their oppressive string-bending brand of rock is a clear influence. At nine releases deep, hopefully, most people know what to expect and will enjoy hearing TGLH go from strength to strength.

You can pre-order this record from Learning Curve Records here. It will be released on the 15th of July.