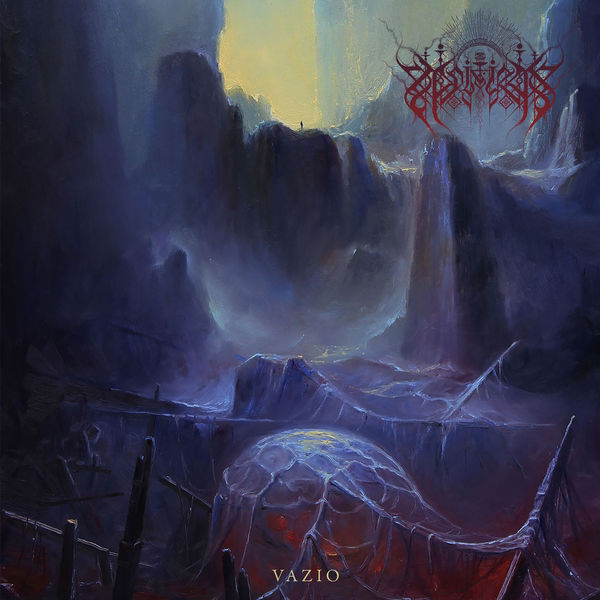 I’m relatively new to funeral doom. In the past, I was mainly interested in the fastest, most technical music. I completely ignored this other side of extreme music. But when I dived in, I went deep.

I’ve gone all the way back to proto funeral doom, with Cathedral’s Forest of Equilibrium, and Lost Paradise by seminal gothic doom legends Paradise Lost all the way up to Bell Witch’s epic Mirror Reaper and the “funeral steel” AOTY contender Stygian from Atramentus.

One thing I appreciated from Atramentus’ Phil Tougas was his devotion to remaining true to the roots of the genre. Reading acts he recommends and lists as influences proved a wealth of fantastic new (to me) material.

Portugese black/doom newcomers Sepulcros (or their label Transcending Obscurity) note some similar bands as a reference point for what to expect from their debut, Vazio – including Atramentus.  So naturally, I was intrigued.

The intro and outro track don’t do much for me and feel a little wasted considering the formula Sepulcros follow for composition. I’ll talk about this more, but for the moment just know that it’s fair to treat it as a four track album.

Funeral doom often follows a specific format. And that’s totally fine. That’s one of the markers of a genre. From this genre, you can expect very slow, drawn out progressions and mournful leads with the payoff coming maybe eight to ten minutes or later unto the track.

There are plenty of funeral doom bands who stick to this format. Again that’s totally fine, but it’s also great to see bands take the best bits of funeral doom and intersperse elements from other genres.

A number of other reviewers have pegged Sepulcros as death/doom. I personally don’t think that’s quite right. Black/doom is probably more accurate. The funeral doom passages are sufficiently doomy and funeral-esque, while the black passages are as dark as a mortician’s humour.

Each song here moves seamlessly between the slower tempo doom passages and the faster black metal, and it doesn’t ever feel tired or over utilised. Blending the two is something Atramentus did well, and we’ve also seen shades of this in others such as Evoken.

While the overall atmosphere and feeling you’ll generally get from funeral doom is melancholy, Vazio feels not unlike what the Portugese refer to as saudade. Not quite sadness, but maybe better understood as grieving for a period of time in the past, or who you or another person was. Wistful nostalgia perhaps.

The black metal passages work as a purposeful, angry counterpoint to this. Not a furious anger like Exocrine or an oppressive anger ala Akhlys but calculated. Like a serial killer who is fully conscious of what he is doing, only to lose control at the vital moment before returning to his brooding to plot the next attack.

The perfect example of this is the track Magno Caos. Just over six and a half minutes is brooding, icy cold funeral doom but it absolutely explodes for a minute or so before winding down for the final 60 seconds, as if tired from the exertion.

My favourite is probably the penultimate track, Hecatombe, with its haunting and melancholic atmosphere. As this song progresses each new bar hits you like a wave, before it finally breaks and you get smashed in the face with blastbeats.

Production-wise, the drums sound absolutely massive. For me this is key in getting the switch between tempos feeling right. It’s also very hard to play both slow and fast without missing a beat – a massively underrated skill.

The inhuman vocals are captured perfectly and stylistically fit very well. I was also very impressed with the guitar production. Getting the right tone to suit both the extremely slow and very fast sections can’t have been easy but it works well and is seamless.

I think four tracks is the perfect length for what is on offer here. Even stretching to six full songs might dilute the effect, with the song structure stuck to rigidly and fairly obviously so. But maybe that’s because I’ve listened to the album a bunch of times? This was the only real weakness I could come up with.

Nonetheless, Sepulcros have managed to pack into a debut album is genuinely impressive. I am very interested in what comes next.

Vazio was released by Transcending Obscurity on 12th March 2021. You can find it on Bandcamp.