Malignant Aura – Abysmal Misfortune is Draped Upon Me 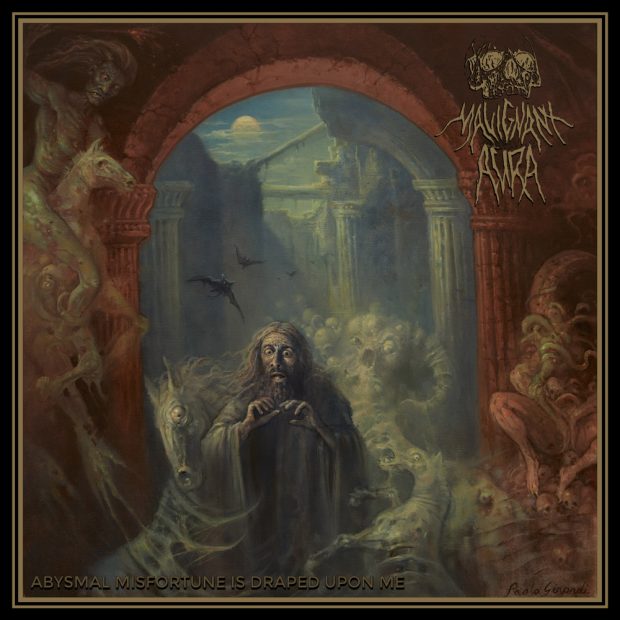 Emerging through the shadows with a sense of foreboding Australia’s Malignant Aura introduce their gloomy and tenebrous death-doom sound with latest release – Abysmal Misfortune Is Draped Upon Me.

Opening track “Malignant Aura” serves a great introduction as to the journey the listener can expect to go on – one of caution & apprehension – the track is slow and ominous in its delivery for the majority so when the solo laden into and slow drums of “In A Timeless Place Beneath The Earth” begin to enter the speakers it’s almost a relief. Two tracks in and fifteen minutes gone, more of this please.

At nearly twelve minutes “There Is Blackness In The Water” has to be my highlight track. Death-doom personified – nightmarish, with an insane hook which blends into slow despair back into crushingly heavy elements effortlessly.

Title track “Abysmal Misfortune Is Draped Upon Me” starts off with the lines from the 1981 horror film Possession ‘There is nothing to fear except God, whatever that means to you’ ‘For me, God is a disease’ instantaneously I’m invested as it’s easily the most purposeful and storytelling of the release and yes, once I finished the album I went and revisited the movie.

“Soliloquy Beneath The Sepulchre” ushers in another commanding presence, providing my favourite guitar parts of the album, I can’t speak highly enough just how much atmosphere this album contains and how well it’s distributed albeit disturbingly throughout, take for instance final track “…And So It Was That I Lay Down Forever” absolutely lulls the listener in with a tempo dip before unleashing a cascade of fury swinging back & forth to deliver a phenomenal end to a great release.

There are no soothing soundscapes, no violins, Malignant Aura are not here to hold your hand, only to inject abject terror into death-doom.

Malignant Aura’s Abysmal Misfortune is Draped Upon Me will be released on March 30th  through Bitter Loss Records. You can buy it here