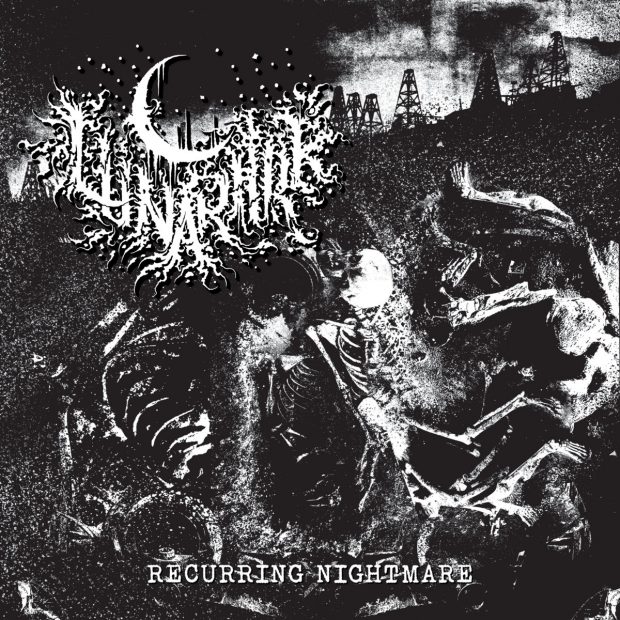 Despite the genre splitting off into multiple sub-genres, the breadth of music under the now-umbrella term of doom has always been politically conscious. Like the blues music from which it came, doom feels a lot like a working-class genre. Songs about the struggles of daily life under an oppressive capitalist kleptocracy are common in both, even if they are not always quite framed as such.

Unlike blues, however, doom has always been used as a vessel to punish. I’ve been to the edges of extreme music when it comes to speed and the limits of the human body, but I am relatively new to the other end. Atramentus and Body Void were among my entry points to this side of things, and through working on this website I’ve been introduced to many more. The latest lesson in my “slow and heavy” education is Lunar Ark.

Recurring Nightmare is the band’s 2nd full length but serves as my introduction to the band. They appear to be pulling in a black metal aesthetic, which includes production on the raw side of things, very harsh vocals, and grainy black & white artwork by Hell Simulation (Primitive Man) featuring buried skeletons and an excessively jaggy logo.

That’s where the similarities to black metal end, however. As soon as the first riff kicks in, you will be under no illusion that this is sludge of the thickest variety. I instantly thought of Eremit when I first listened. Both bands have an affinity for the same kind of buzzing guitar tone and huge riffs.

Lunar Ark shares another similarity with the Deutsch doomers in terms of a quest to see how much they can get out of a single riff. The key to appreciating slow music is to be patient and understand that a payoff will come, just not as soon as it might in other genres. Both Lunar Ark and Eremit stretch this close to breaking point.

Whether this is a good thing or a bad thing depends on your preferences and state of inebriation when listening. If I still smoked, I can imagine getting lost in the hypnotic, droning nature of one big heavy-ass riff repeating over and over. Sober, it’s a little less hypnotic but you can rest assured that yes, reprive does come.

In this case, it comes in post-metal tinged instrumental waves. Trem-heavy passages dripping with a foreboding atmosphere serve as a welcome bridge between sludge sections. It’s these sections Lunar Ark are set apart from the pack a little.

There are only three songs here, but the album is not short on impact, either musically or lyrically. The theme here is broadly an attack on late-stage capitalism and the apparent rush to extinguish life on Earth in the pursuit of profit as if being the last one standing represents a grand goal rather than the most remarkable failure.

There’s a phrase in the prepper community, ‘doomer’, that means someone who obsesses about an impending societal and/or environmental collapse and is devoid of hope. There are few people who live the doomer life full-time, but enough for it to be called a community. Living life at the extreme edge is never good, but there is truth in what they say, and it might be for the best if more people bore the weight of their terrible truth.

Similarly, there are also few people who live life only listening to slow, heavy, politically conscious sludge, but maybe more people should bear the full weight of bands like Primitive Man, Body Void and Lunar Ark both musically and in their message. Recurring Nightmare is a warning of and the soundtrack to our future if we don’t change immediately.

Recurring Nightmare by Lunar Ark was released on 10th September by Trepanation Recordings. You can buy it here.