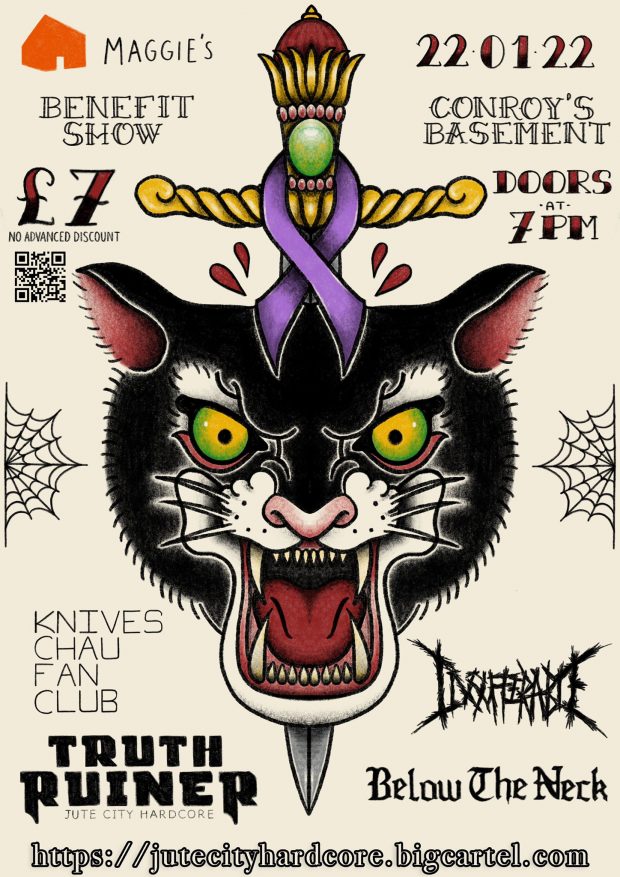 On Saturday 22nd January 2022, Jute City Hardcore in conjunction with Conroy’s Basement put on a benefit show that raised £486.30 for Maggie’s Dundee.

I could talk about how/why* live music has been harder to find the last few years, but with the quality of music and atmosphere on offer I would have honestly needed reminding of that half-a-song in. 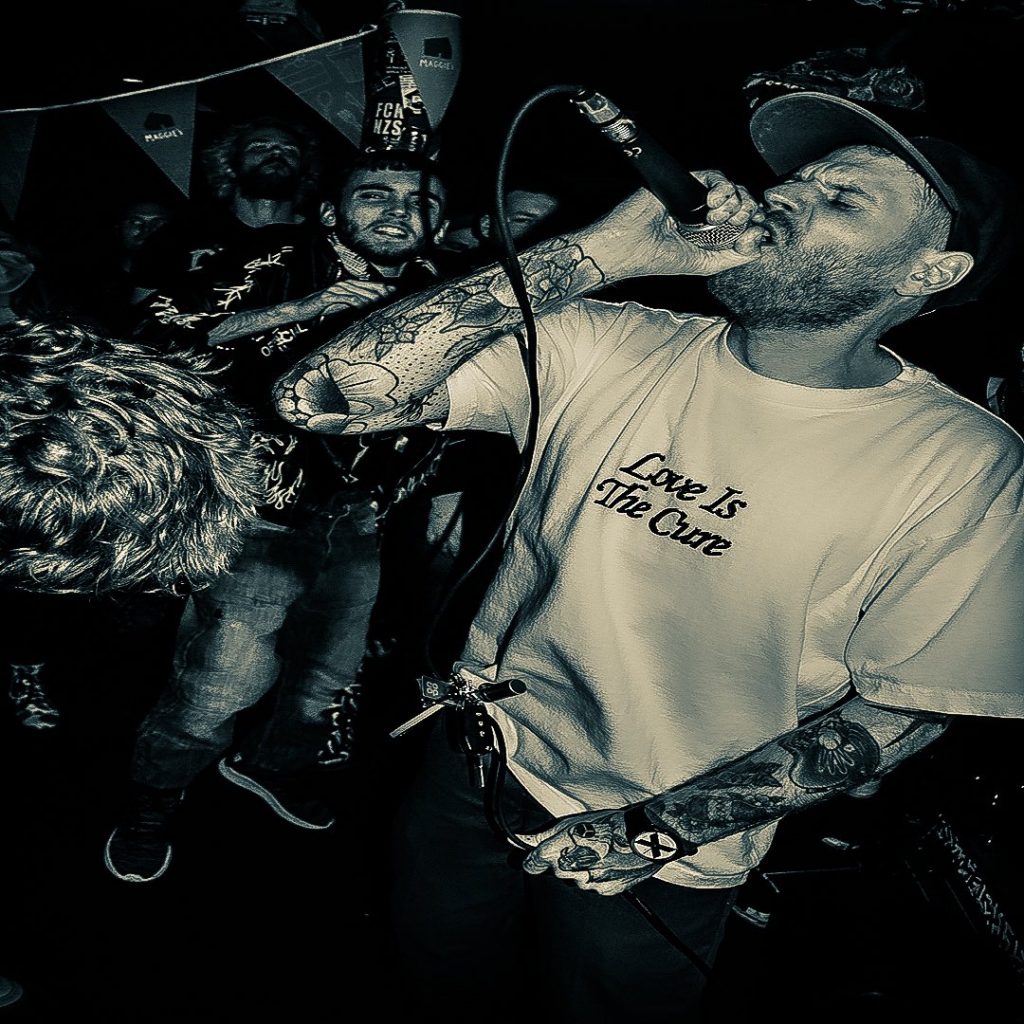 Acoustic solo act BILE YER HEID opened with exactly what I’m looking for in Scottish folk-punk; fast energetic riffs, straight to the point lyrics and catchy tunes that made me smile. This was his first gig in two years, he was added to the bill less than 6 hours before doors, and given the strength of performance, this is as impressive as it is appreciated. This was a rousing performance that geared the crowd up for the rest of the evening.

It could be argued that Dundee is dependable when it comes to certain styles of music, but the expertly composed grooves of KNIVES CHAU FAN CLUB are more than simply continuing the tradition of excellent Emo and Punk to be found here. Highlights of their set were the songs, “If Halfway Through Pirates of the Caribbean 5…”**, and “{song 4}” which if listened to concurrently showcase the impressive variety of vocals from vocalist Andrew Hart. And very cool shorts lads, if not a bit distracting.

Rosyth’s INSUFFERABLE were up next, leaning more into their Noise sensibilities, playing with an altered line-up. I’ll be honest in saying this wasn’t my thing; a bit too slow and atonal for my tastes but those in attendance enjoyed the performance.

Another example of their true prowess as a live band can be found here. It’s impressive on reflection that they played a set so different to the extensive back catalogue available online. Definitely check them out, as I will be for the foreseeable future. 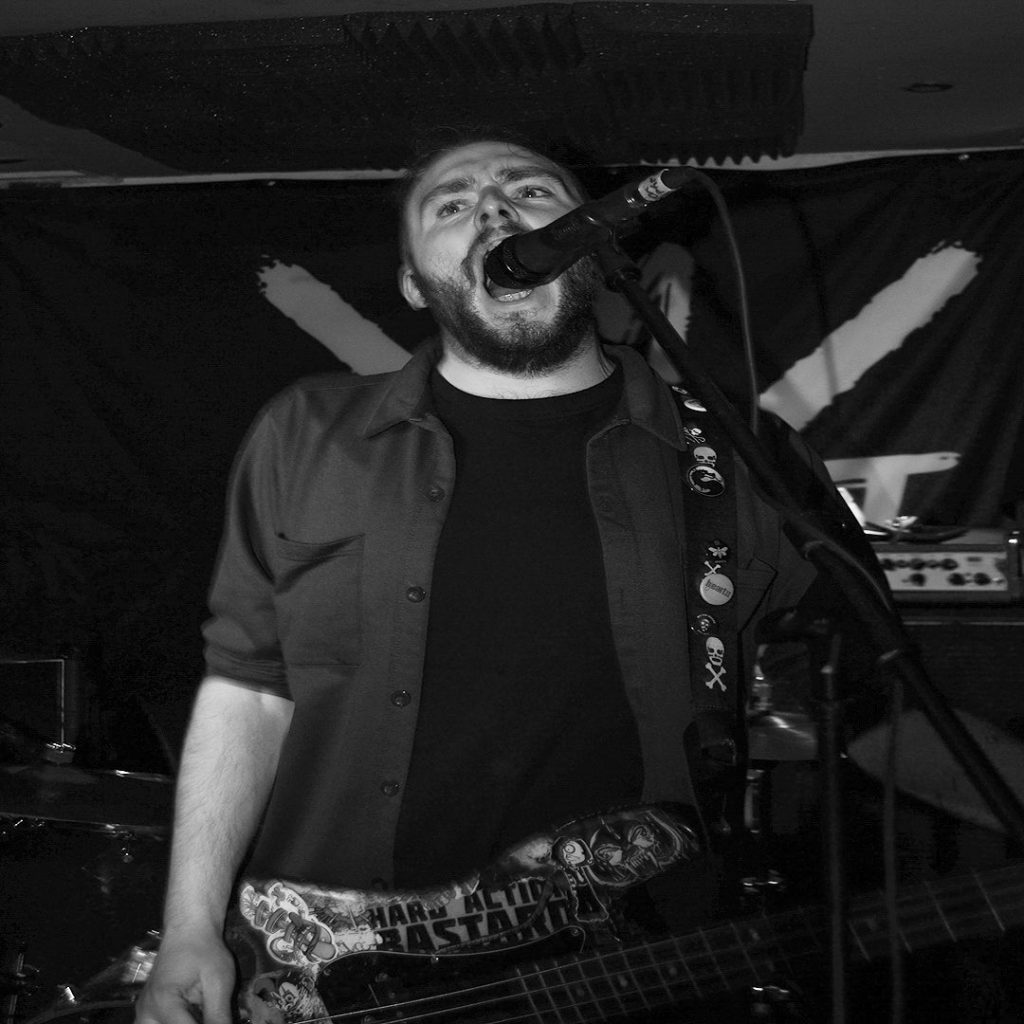 To finish us off for the evening were Jute City’s budding Hardcore quintet TRUTH RUINER. For such a new band they had great chemistry with the crowd which is evident by the response they got, as well as being indicative of the innate moshability of their jams. I look forward to their forthcoming release as should you! The only issue with a set this tight, this fast and consistent is that it feels over way too soon, as did the entire evening.

Reducing how much I enjoyed the Maggie’s Benefit Show to a numerical score would be disingenuous, so I’m giving it a “yous are all great/10”.

* Presumably a reason for some of the line-up changes also.

** A hilariously long song title, presumably designed to inconvenience people like me in this exact way.