Fit For An Autopsy – Oh What The Future Holds 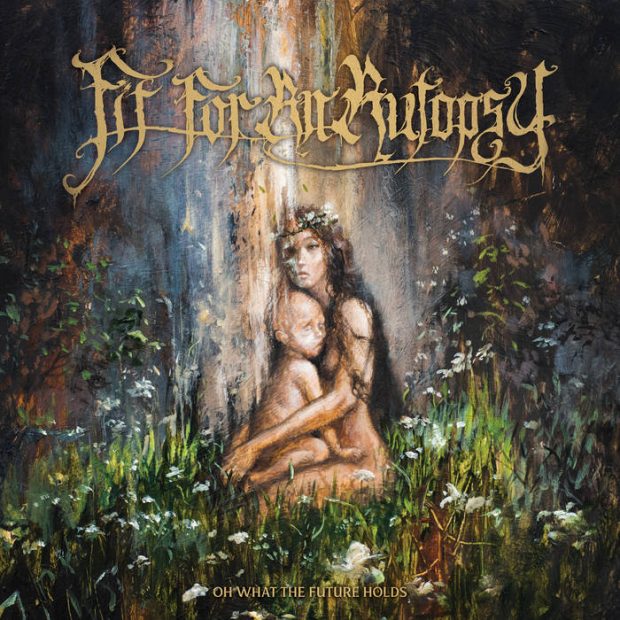 The second instalment of the Deathcore Day (14th January) review series continues with easily the most anticipated record of all. Fit For An Autopsy return with their latest release Oh What The Future Holds and it does not disappoint.

This being their sixth full length release in a little over 11 years we can safely call the band veterans of the scene now. Seeing the growth and maturity of the band develop over the last four records has been fascinating to watch. Originally starting out with a classic deathcore sound, they always had more technical elements and could create different soundscapes unlike some of their peers and now are fully committed to a more progressive metal sound but with still enough deathcore leanings to keep the patrons happy.

Super-producer and FFA guitarist Will Putney of course is at the helm and continues his dominance and reputation as the go-to guy in the heavy music scene. The small details that he picks up on or adds into his work is incredible, whether it’s the way he can create an ambience or atmosphere to small guitar nuances that add progressive elements. The band have always been the anomaly in deathcore: always more measured and calculated than your average “pummel you to oblivion” sound.

Joe Badolato’s monstrous vocal power is expertly juxtaposed with his clean melodies. The way the vocals overlay on certain tracks create a perfect harmony is outstanding. He is hugely underrated when people talk about best metal/deathcore vocalists and I hope this record makes people take notice.

The first single off the LP, Far From Heaven is a very apt song thematically for the times we live in and also the perfect showcase for who the band are and what to expect. The guitars, drums, vocals and bass just sound razor sharp and when the guitars and vocals sync up you cannot ignore the urge to headbang. The chorus is tracked with the harsher more growled vocals and complimented by the cleans at the same time and the result is super catchy and makes it difficult not to sing/shout along.

Fittingly the second track and second single is called Pandora and once you get deep into the record you do get the feeling the box had been opened. It’s like a Titan has awoken and is demolishing all in its path. When you hear the record it’s as if you feel you should be craning your neck up at a skyscraper.

Overall the record is 10 tracks and clocks in at perfect 45 minutes in length. Each track stands like giant columns in an ancient Roman or Greek colosseum. They are each works of art, handcrafted and detailed with a compelling story behind them. Even the title track intro which is under 3 minutes builds from an ethereal almost hazy piano led beginning with each instrument entering at different phases before launching into a relentless assault with hints of a black metal wall of sheer terror.

Two Towers is the standout track – after a Chino Moreno style vocal beginning the track morphs constantly into various forms over the run time from gargantuan sounding deathcore with fast riffing and a chorus being bellowed like Zeus atop Mount Olympus – it’s an epic moment and perfectly titled.

I can easily say this will be in my favourite records by year end and yes we are only in January, I know. But this record is special. Its complex layers will give you something new to think about with every listen and is not something that can be fully understood on 4-5 listens. A recurring feeling across the record I get is its scale and size.

There is an intangible mass to this record, a heaviness beneath the surface level sounds. Its chunky, thick and just an absolute tour de force of modern metal. Fit For an Autopsy have reminded us that they hold the keys to this kingdom and to overthrow them will take a lot more than a few breakdowns or blackened riffs.

Nuclear Blast will release Oh What The Future Holds by Fit For An Autopsy on Friday 14th January and you can buy it from here.