Eye of Purgatory – The Lighthouse 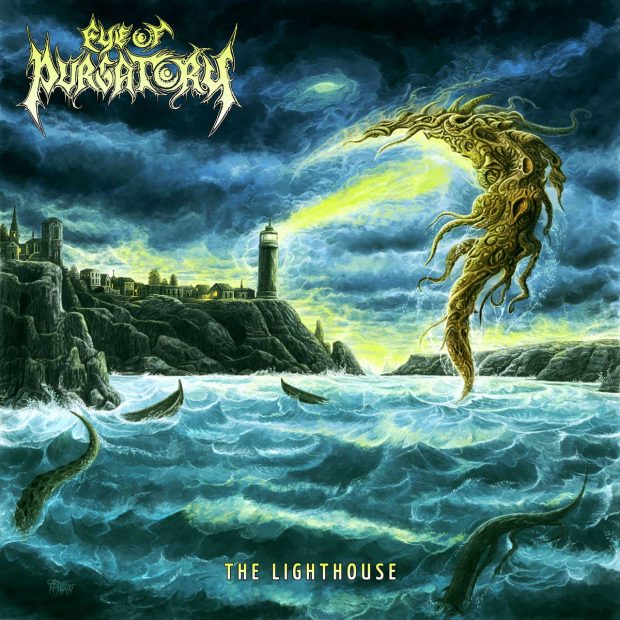 The cover for Dawn of Nil’s 2019 album Culminating Ruins featured a grotesque obelisk rising from the sea with more ominously rising in the distance. This was hand-painted by the project’s sole member Vincent Laugier. Something about this art has stuck in my mind since. It looks vaguely techy but also has a bizarre flesh-like texture to it. Is it alive? Is it a technological alien relic? It’s intriguing, anyway. Imagine my surprise when I saw the cover for Eye of Purgatory’s latest album The Lighthouse. What appears to be the same creature has risen from the sea and is being held back by a lighthouse!

This is where the similarities end, however. Swedish melodic death metal trio Eye of Purgatory worked with Juanjo Castellano to create this incredible cover art which tells a story so enticing that, if you are anything like me, will have you desperate to hit play.

Of course, when you do you won’t hear any of Dawn of Nil’s progressive tech death either. This is a Rogga Johansson project after all. I have a self-defence theory (to protect my own ego, you understand) that one person can only have so much talent, but some people sink it all into one skill tree to become world-class at something. If my theory is correct, Rogga likely burns his boiled eggs and wears shoes with velcro instead of laces because he’s sunk everything into mastering the quintessential Swedish death metal sound.

One thing that makes Eye of Purgatory stand out immediately is the addition of a keyboard. I presume the band will not play live because drummer Taylor Nordberg is also credited with lead guitar and keyboard. Many reviews, including this one will make a bit deal of Rogga Johansson who provides guitar and vocals here, but the “melo” in this melodeath is undoubtedly provided by Nordberg’s contributions.

His lead parts on both instruments are proper earworms. I challenge you to listen to this and not end up humming the opening keyboard part on To Fornever Awaken or the lead guitar hook used throughout Where Slowly Life Fades. Or the opening lead guitar from The Lighthouse. I’m pulling out specific examples but to tell the truth, every song has at least one catchy section. The fact that some of these are on keyboard rather than guitar is a pleasant addition unless you’re some sort of keyboard hater.

The real key to what makes this album so fun to listen to is the band’s ability to blend these catchy melodies with proper heavy parts. You’ll hear this on Carved In A Stone Bleeding, for example, where crunching death metal riffs are paired with toe-tapping melodeath to great effect.

This style of music is easy to get wrong. Even if you write and play immaculately, production can let you down. There’s no point writing catchy riffs if your drum production overpowers them in the mix, for example. The Lighthouse has no such issues. There are moments where the keyboard does threaten to overpower the song but these are at times where it is the lead instrument so I never felt that it was unbearable or ruined the song at any point.

I want to conclude this by letting you know that it is frankly insane that the digital version of this album is being sold for €4.99 on Bandcamp. There are a plethora of merch options as well if you are so inclined. This is a Transcending Obscurity release after all. I strongly encourage you to support this release by buying at least the digital version. I don’t normally shill this hard for someone not paying me but if you’re a fan of Swedish melodeath, you need to support this so that Eye of Purgatory write a follow-up.

You can pre-order The Lighthouse by Eye of Purgatory on Bandcamp here. It will be released on the 18th of June.