EP Roundup #4 – The Present and Future 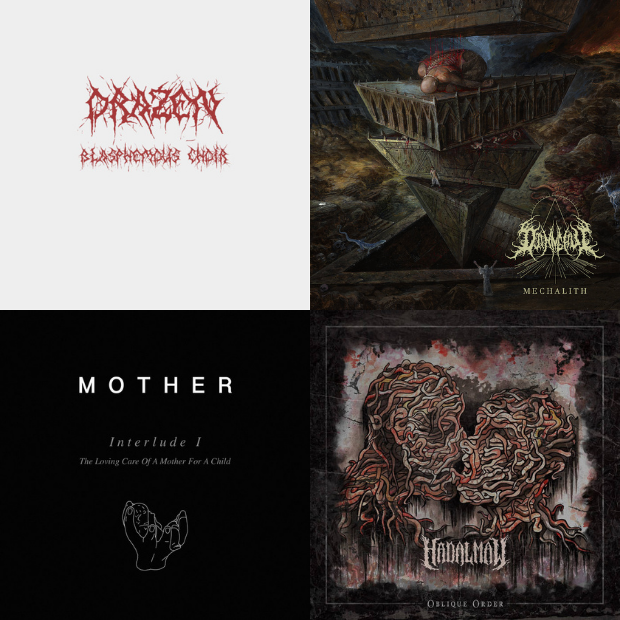 This was originally going to be one article, along with EP Roundup #3, but it would have ended up being far too long, so instead you have two EP roundups in quick succession! Where #3 looked at some EP’s released earlier this quarter, this one will look at more recent releases as well as some that you would be mad to not pre-order, or at least wishlist so you get a push notification as soon as the full thing is released.

First up is Drazen who have given us two tracks of early 90’s thrash for your ears. To me, there’s nothing really new when it comes to thrash, and Blasphemous Choir isn’t a release that will change my mind on that front. They also don’t miss a step at all and have produced some very solid headbanging material here.

I can imagine hearing this at a bar and not minding all that much that I’ve spilt my beer when I raise it up yell cheer triumphantly at the end of each song. With a little more time and creativity, Drazen could easily put out an album filled with bangers.

If you or I sat down to bash out a black metal record in two days, we might come up with something that was half decent but needed more time to really be polished. If you are Garry Brents from Cara Neir/Gonemage/Sallow Moth and a number of other projects, then you’ll be able to create Subverse Siphoning of Suburbia under the new project name of Homeskin in around 13hrs.

If you’ve followed along with the Cara Neir and Gonemage storyline, this is a daytime counterpart to Gonemage but set in reality instead of dream realms. What this means is that all chiptune and electronic bleeps and boops are gone, and we’re left with stripped-back second-wave black metal that I can’t stop listening to.

Subverse Siphoning of Suburbia by Homeskin was released DIY style on November 5th. It’s NYP on Bandcamp so go and pick it up now.

Sharing a name with a cult Japanese RPG is an excellent way to get me to listen to your record. Belgian Post-black band Mother probably didn’t intend to hook people in that way, but that’s just how my mind works. I’ve really struggled with the terms “post-black” and “blackgaze” in the past, but when I hear Mother, I instantly peg them as post-black, and possibly one of the stronger examples of this sub-genre you’ll hear this year.

I’m always a sucker for a concept, and Mother absolutely scratches that itch for me too. Interlude I is, as the title suggests, an interlude to the band’s 2020 debut album I. This introduced us to the central character of Mother, as she led a protagonist through several junctures. Not that you’ll be able to make out the lyrics. You’ll likely instead be mesmerised for the entire 12 minutes.

Interlude I by Mother was supposed to be released by Consouling Sounds on the 12th of December but the full thing dropped on the 19th of November instead. Listen to it here.

When this promo dropped in my inbox I didn’t realise the band had already released a couple of albums. I will need to go back and listen to these at some point but I feel like an EP format is a perfect outlet for the music of Djinn-Ghul.

It’s not that the band do anything wrong per se. I just feel like a short, sharp burst is the best way to enjoy certain flavours of extreme music. I know I could be in the minority here, and that there are a lot of shit-eating wild men (and women) out there who just live for endless brutality. Either way, the four tracks on Mechalith will be enough to whet your appetite, and also answer the question: what would it sound like if Fear Factory embraced a djenty deathcore sound?

Mechalith by Djinn-Ghul will be released by Vicious Instinct on the 9th of December for some reason. Pre-order here.

Genres? Huh! What are they good for? Well, they are actually pretty useful when you think about it. They are also fun to play with. Take a sprinkling of genre X and a smattering of genre Y, layer the production from genre Z and you have something new and interesting. Or a mess. Thankfully, Hadal Maw has found a winning combination in terms of pulling in progressive, technical and dissonant death metal together.

Australia’s Hadal Maw have put out a few albums to date, with each one showing an iterative improvement to the songwriting and overall sound of the band. Oblique Order is not only four songs, it’s probably the strongest four songs they have released so far. This might be my most listened to EP this year and I only got the promo a few weeks ago.

Blighttown Records will release Oblique Order by Hadal Maw on the 31st of December. You can pre-order by clicking here.