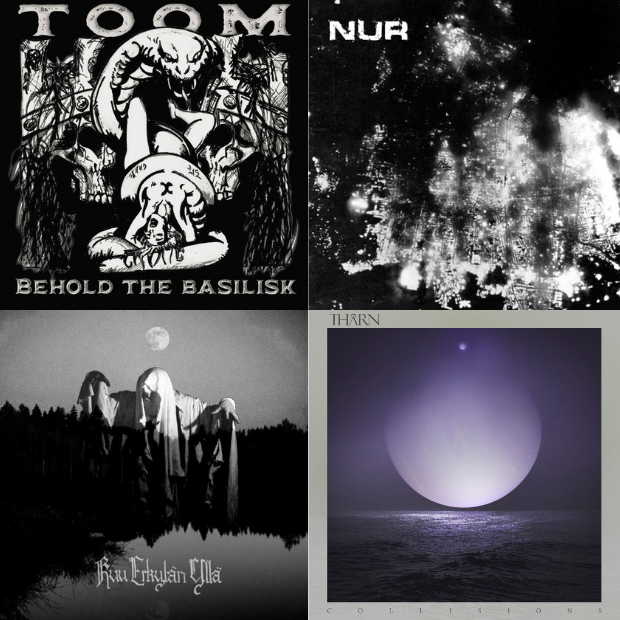 I’ve recently had a change of heart. Previously, I rarely posted reviews past a record’s release date. The main reason for this was for SEO purposes. In general, people are more likely to read about something that is yet to be released than they are to read a review of something they can just go listen to themselves. It wasn’t terrible logic on my behalf to try and get reviews out two weeks prior to the release date and then work on promoting those reviews to bring in more traffic and more ears to the music.

The reason I’ve changed my mind on this is simply that there’s just too much music coming out every week to possibly keep on top of it all, and too many fantastic records were falling through the cracks. This EP review is evidence of this. I’m writing this in December and some of these were released in October. Ok, that’s partly tardiness on my side too, but the point stands.

So, behold. Some of the EPs and shorter albums I’ve been listening to a lot but haven’t promoted on the blog yet. This is part one of two, covering things from the past. The next will be out a few days later and focus on the present and the future – more recent stuff and releases for you to pre-order.

This live EP featuring future members of Uncle Acid and the Deadbeats, Slabdragger and Old Man Lizard is finally seeing the light after gathering dust for 11 years. Who knows how many of these kinds of recordings are lying around. Projects that sound absolutely viable but for various reasons and circumstances come to nothing. We should be glad that APF Records saw to releasing Behold The Basilisk because this is a great chunk of sludgy doom.

After a brief intro, we get three tracks of downright filthy fuzzy stoner doom of the highest order. No matter which of these tracks you listen to, you can press play at any moment and it will instantly be riff o’clock. Despite being recorded live, this sounds absolutely massive, with fat bass filling things out nicely. Only the drum sound (cymbals specifically) gives the game away.

Behold The Basilisk by TOOM was released by APF Records on 1st October and you can buy it here.

Following up your strongest record to date is no easy feat but Finnish Black metallers Havukruunu return with 5 songs of their trademark atmospheric style of classic Black Metal. A reworking of some older material which whilst not on the same epic scale as some of the newer sounds it is still nonetheless an absorbing listen with some excellent guitar riffs and solos.

The musical breakdown and tempo/style change in Routanpassari is for me the real highlight of the record and segues perfectly into the final leg of the record which continues the melody and at times ethereal sounds.

Although classed an EP the 35 minute run time does not waste a single moment and could easily be classed as a full length. If you want Black Metal that conjures imagery of wintery barren landscapes and desolation then this is for you.

Havukruunu put out Kuu erkylän yllä through Naturmacht Productions on October 8th and you can stream or buy it here.

I had this slated for review before the original release date was moved for unknown reasons, I then forgot about it because I didn’t update my external brain (a big spreadsheet). This was very silly of me because this is a record that more people need to know about. NŪR are a sludgy post-metal act in the vein of Pelican and Cult of Luna from Israel who can do more with 15 minutes than many established acts manage with double or triple that runtime.

The main takeaway from this record is how easily NŪR play with your emotions. There’s something about the timbre of the vocals that exude anguish and rage. That, paired with the super-low droney chug makes me want to stomp around cold, grey streets and ruminate. I will be watching for a debut LP from NŪR and you should be too.

NŪR released Negative Transfer through Suicide Records on the 15th of October. Grab it from here.

Another post-metal release, but this time stirring up completely different emotions. Where NŪR approach things through the anger of metal, Thårn feels a lot more emo and definitely encapsulate more of the “post-” sound. It’s not that Thårn can’t roar and blast, they just take a bit more of a nuanced approach to their songwriting and I feel like they imbue their vocals with more emotion.

There’s also a feeling of barely holding these emotions in, with the lid occasionally coming off completely with an explosion of crusty d-beat. I imagine forming a new band around the same time as the first national lockdown in a global pandemic will do that to your songwriting.

Thårn released Collisions through  Surviving Sounds on the 12th of November. Pick it up here.