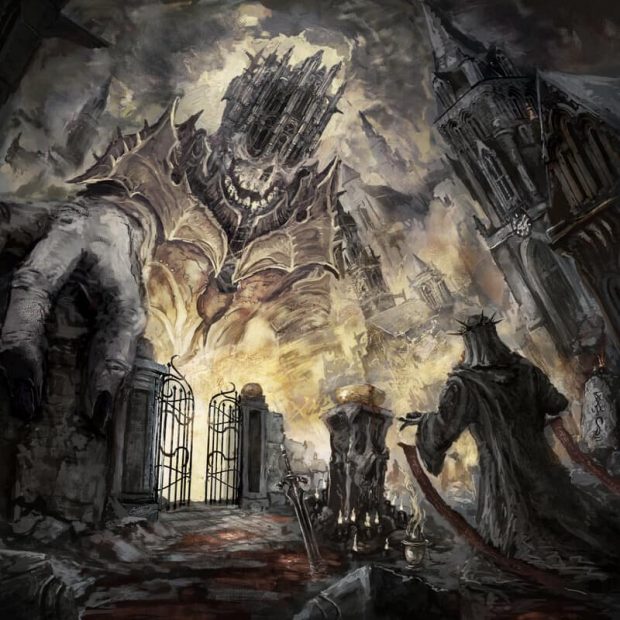 One of the things that people love about prog rock is the freedom the genre has to tell and explore stories through the music. Of course, a lot of artists do this across genres but fantasy and sci-fi specifically have been the remit of prog for a long time now. Yes, heavy metal and power metal fans are familiar with fantasy themes. Even doom has its share of fantasy fans (hello, Conan!).

But if you tell me you are listening to an album about a distant race of humanoids or magicians, I’m going to assume it’s prog rock. Distant has taken a similar approach to storytelling but used ferocious deathcore as their canvas instead of psychedelic prog rock.

The Dutch/Slovak deathcore sextet’s latest release Aeons of Oblivion bundles together all of their recent material together with a number of new tracks to tell the story of the land of Tyrannotophia and the eventual awakening of Tyrannt. I’ll refer to this as a single album from here out though because that’s how it’s packaged.

If you followed the story along with the previous two releases, you’ll know that this is the part where Bad Things happen. If you haven’t followed the story, or you can’t quite make out the lyrics (understandable!) then you’ll be able to order the book that the band are releasing alongside this album.

I am strongly considering ordering this book because I’m a sucker for a concept. I’m also intrigued about how dark the story can be if the band see it fitting to set it to some of the most consistently brutal deathcore I have ever heard. Aside from the odd interlude, there is close to no let-up across the 61-minute runtime. This is an album designed specifically to pummel you into submission. In fact, we may yet see the CIA use this for advanced interrogation.

The amount of work that has gone into this project is genuinely impressive. Along with writing a producing this beautiful hardback book, the band have invested heavily in artwork for other parts of the project in order to allow fans to fully immerse themselves in the world of Tyrannotophia. Working closely again with artist Caelan Stokkermans (Fires In The Distance, Hannes Grossmann, The Acacia Strain, Lorna Shore, Wolfking), Distant have ensured they have a solid art direction that is uniquely theirs. This includes the use of custom-designed sigils “designed to provide instructions to awaken Tyrannt by those who can decode them”.

Process video for my most recent artwork for @DistantNL album “Aeons of Oblivion” pic.twitter.com/DEJA9YzPoa 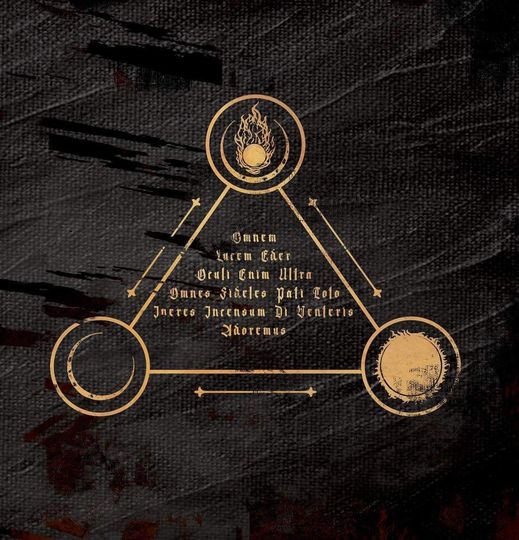 Suffice to say, anything you purchase from this band will be beautifully imbued with ideas and themes from the grand story they have been weaving. But we’re this far into the review and I’ve not even mentioned the music yet. Because all three releases that make Aeons of Oblivion are so consistently strong, I’m only going to refer to the five new tracks presented here. As far as I can make out they are:

Grnja’s vocals across these tracks seem eviler somehow. Maybe it’s the production, or maybe it’s a sign of improvement considering how busy these guys have been while the rest of us were getting fat during lockdown. Anyway, everything he does is absolutely ferocious and really keeps with the theme of a demon-like tyrant king coming back from a dormant state to destroy an entire realm. The guest vocal spots from Kyle Anderson and Adam Warren only serve to highlight just how strong he is.

Despite this band have three guitarists, bassist Elmer Maurits carries quite a lot on his back. The low-end he contributes sticks out enormously and really fills out the sounds in headphones. I completely forgot bass drop before breakdowns were a thing, and always thought they were a bit tacky and overdone, but when used sparingly as Maurits does, they do a fantastic job of aiding the transitions and keeping the energy up. How tempo changes are handled by the rhythm section as a whole varies from track to track and makes for a refreshing change from the bands who learned their craft watching MySpace deathcore and simply paint by numbers

The problem with having three guitarists in a band like this is that, as with Whitechapel, you never really notice it. The music itself is obviously not straightforward rock music, but it’s never technical or complex enough to warrant a 3rd guitarist. In saying that, we don’t know what each brings to the writing and composition of the music so it may be something that makes sense in that context. Being able to replicate the recording’s thick guitars live may also make it worthwhile to have an extra person in the band. They may well need the extra man on stage to compete with drummer Jan Mato’s blastbeat repertoire!

Bundling all three releases together makes thematic sense but it’s a lot of deathcore… I had a similar gripe about Osiah’s latest album, but this is 19 tracks that clock in at over an hour. Distant is one of the best out there doing this stuff, but the genre is not known for the kind of diversity you need to show off in order to keep most people engaged for the full run-time. On meeting people who are new to the genre or who I think might be interested, I would absolutely recommend Aeons of Oblivion despite these reservations. I would, however, remind them that this is best enjoyed in three bites rather than one huge meal.

The new tracks offered here are *chef’s kiss* top tier deathcore. Distant may be slugging it out in the “best of” lists with Lorna Shore if they drop a new album in 2021. I don’t see anything in the music offered here that I can criticise or would like to hear more or less of. I do question the wisdom of bringing together so much material, especially when the 61-minute album contains less than 15 minutes of new material. Still, Distant get top marks for unwavering execution of their artistic vision.

Distant will release Aeons of Oblivion on Friday 11th July through Unique Leader Records. You can pick up a fuck-tonne of sweet merch over on the band’s official site. Seriously, it all looks sweet a fuck.