Callus – A Breath of Flesh Air 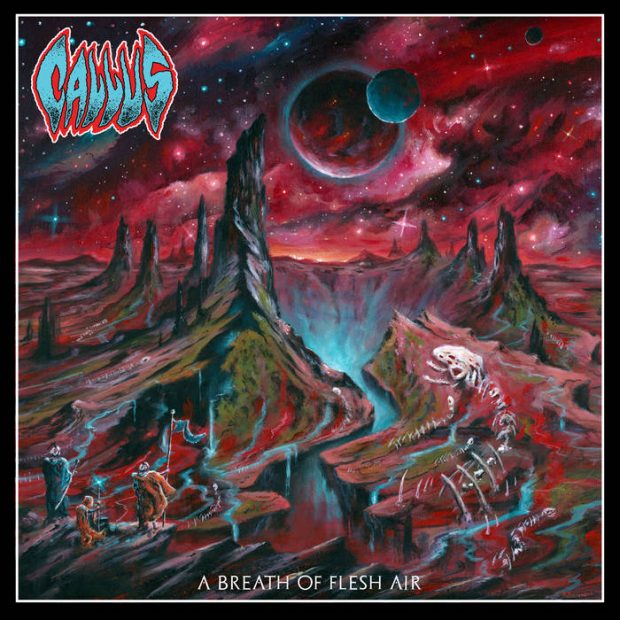 Callus, hailing from Preston, England, bring their own interpretation of stoner metal to the fore with their latest release, A Breath of Flesh Air. With plenty of stoner metal riffs, they also incorporate influences from other genres such as doom, thrash and heavy rock. Not only does this cleanse the stoner metal palette, but it shows they don’t want to be conventional in their songwriting process. This, for me, makes them stand apart as an upcoming band as it shows they are willing to experiment and diverge from the aforementioned genres. Sure there are the obvious sludgy tones driving each song, but with tempo changes and interesting rhythms, Callus keeps it fresh enough throughout.

When listening to newer bands, I often try to engage with the idea of who their influences are, but with Callus, it proved more difficult, as they do have a variety of songs and styles on A Breath of Flesh Air. The obvious comparisons, for me anyway, range anywhere from the Melvins, early Mastodon and Orange Goblin, but I wouldn’t be completely surprised if none of these bands has truly influenced them in any shape or form.

With the opening riff of ‘Molar Crown’, the song erupts into an upbeat tempo with heavy vocals that wouldn’t go amiss on a Sepultura record. In addition to the vocal performance, and to my delight, the drumming on this track sounds very organic and punches through the fuzzy walls of guitar and bass, exuding an energy that is sometimes lost in this genre. The tempo changes throughout are structured and allow the band to introduce an idea of a riff and expand on it further down the line.

Delving into their library of sludge-laden riffs, Callus also explores different singing styles, song structures and melodies. This is apparent on tracks such as ‘Ka-Tet’ and ‘Sorrow’s Bane’ where the highlight for me is the clean singing. The vocals on these tracks remind me of old school metal, such as, yeah, you guessed it, Black Sabbath, but also with some new-school influences such as the likes of Red Fang and Baroness.

In addition to the many and varied influences that are evident throughout, I’d like to point out the production and mixing on A Breath of Flesh Air. Chris Fielding of Foel Studios has done an excellent job in combining the essence of the various vocals styles over heavy down-tuned riffs whilst not losing any of the low-end of the snarling bass or the clarity of every drum fill and cymbal hit. If you look at the clients for Foel Studios, you will know that Callus have chosen wisely.

With A Breath of Flesh Air having seven tracks, there were plenty of opportunities for Callus to experiment, and that they did. At no point on the record did I feel the record dragged and there was enough variety throughout, especially in my favourite track, ‘Fatberg’. Big melodic riffs, dark spoken word and heavy soaring vocals made me really sit up and take notice that this band know exactly what they’re doing.

Callus has a clear vision of what they want to sound like and allow for other influences to creep in, with no detriment to the songwriting and consensus of sound they wish to portray. A solid listen and if you have a keen interest in the stoner side of metal and you like your riffs big, with fuzz and groove on the side.

Callus will release A Breath of Flesh Air on 29th October via Trepanation Recordings and you can pick it up here.